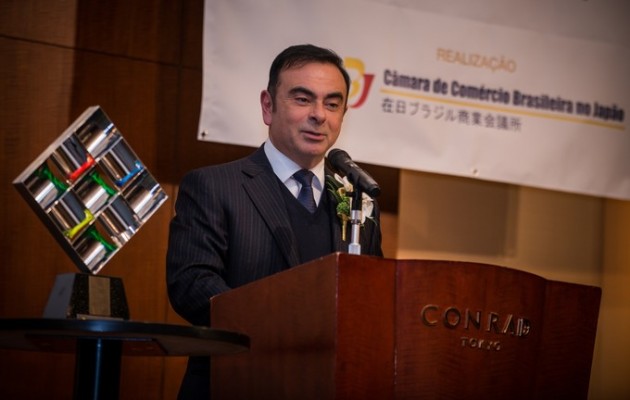 The Chamber of Commerce of Brazil in Japan (CCBJ), after measuring the credentials of a number of worthy candidates who made strides to strengthen the economic bond between Brazil and Japan, named Nissan President and CEO Carlos Ghosn Person of the Year 2014.

The results were announced on Wednesday at an award gala at “a hotel in central Tokyo.” There were specific attendees to the non-specifically-located event, including CCBJ President Marcos Turini and Ambassador André Corrêa do Lago.

“I am honored to receive this award from the Brazil Chamber in Japan,” said Ghosn in his acceptance speech. “It is a reaffirmation of my view that differences between people and cultures can be a source of strength, of potential wealth and opportunity, just as these elements have become driving factors in the growth of the Renault-Nissan Alliance.”

Earlier this year, Nissan was a significant presence at the 2014 São Paulo International Motor Show, where it revealed its Kicks concept crossover. In April, Nissan also opened a production hub in Resende, Rio de Janeiro that will eventually employ 2,000 men and women and have an annual production output of 200,000 vehicles and 200,000 engines.

Nissan’s ambitions for global expansion include becoming the number one Japanese brand in the Brazilian market by the end of 2016.