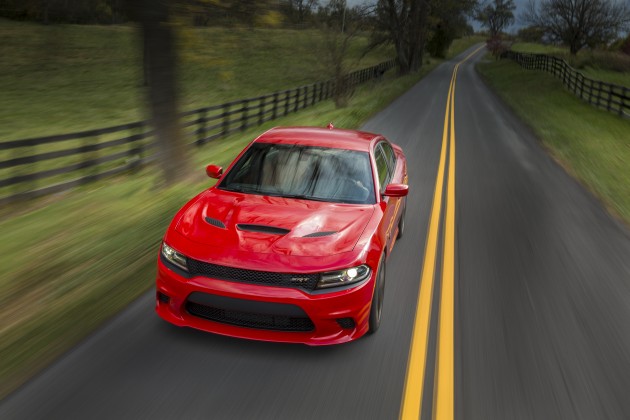 This week, the 2015 Dodge Charger SRT Hellcat was named the 2014 Star of the Show at the South Florida International Auto Show (SFIAS). The award was given out by the Southern Automotive Media Association (SAMA).

The all-new Charger SRT Hellcat has been turning heads ever since Dodge pulled back the sheets this summer. It’s powered by a supercharged 6.2-liter HEMI® V8 engine that makes a monstrous 707 horsepower. Just as impressive, the Hellcat rockets from 0 – 60 in just 3.7 seconds and maxes out at 204 miles per hour.

The president of SAMA, Bill Adam, said of the Hellcat, “The new Dodge Charger SRT Hellcat has quickly captured the world’s imagination. Other automotive manufacturers have made high horsepower vehicles over the years, but none comes close to this one. Dodge has built a family capable performance sedan that is sinister and powerful looking, while still able to achieve impressive gas mileage, making this car the 2014 Star of the Show.”

“Thanks to the Southern Automotive Media Association for this prestigious award recognizing our new ultimate performance sedan and its unrivaled capabilities,” commented Tim Kuniskis, President and CEO of the Dodge and SRT Brands. “We’re proud that in its auto show debut, the Dodge Charger SRT Hellcat is carrying on the buzz that began earlier this year when our Challenger SRT Hellcat surprised the muscle car world.”

Dodge has been killing it at the auto show rounds lately, taking some unique concepts to SEMA courtesy of Mopar and even unveiling the 2015 Mopar Dodge Charger R/T Funny Car. Dodge also hit up the San Antonio Auto Show with quite a nice display.

In the News: Cadillac and American Airlines Partner for Luxury Airport Transfer Program