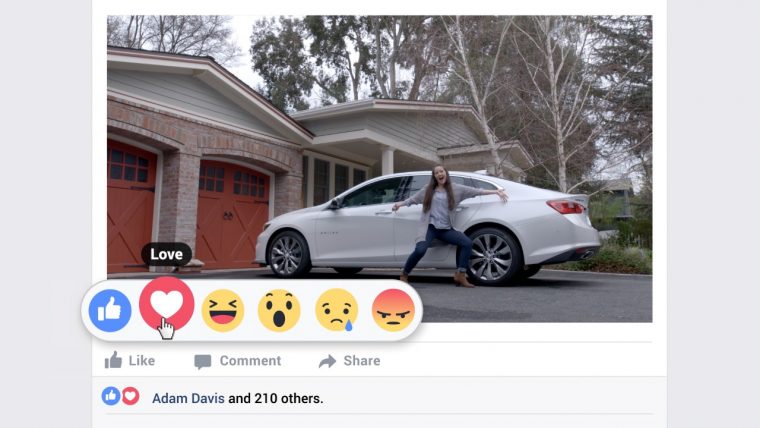 Wow, that was fast.

Facebook just rolled out new Reaction buttons today, and Chevy has already released an ad for the 2016 Malibu that references this watershed moment in social media history:

Chevrolet is one of the first brands to capitalize on Facebook’s tacit acknowledgement that not every response is as simple as liking or disliking something, and that in fact, human beings are complex creatures with a whole range of emotions.

Five emotions, to be exact; all of which can be expressed in emojis. The most powerful of these emotions—which include “haha,” “wow,” “sad,” and “angry”—is the heart-shaped “love,” and according to Chevrolet, what the world needs now is (Facebook) love, sweet (Facebook) love.

Decrying the overabundance of “likes” in our universe, the commercial encourages people to engage in sincere expressions of love. Not just for any old Instagram photo of artisanal donuts or video of a dog befriending a kitten, but for important and life-affirming events, like the birth of a child, or the purchase of a reasonably priced mid-sized car.

Safe Driving: Why driving while drowsy is more dangerous than you realize

“Timing couldn’t be more perfect for Chevrolet to bring the all-new 2016 Malibu and Facebook’s new Reaction buttons together,” said Chevy marketing VP Paul Edwards. “The midsize segment has traditionally offered many options to ‘like’, but only the new Malibu inspires the emotion to ‘love’.”

Unfortunately, YouTube has not kept pace with Facebook, so this 2016 Chevy Malibu commercial is currently disliked by one person and liked by 38 people, but loved by no one:

Something about this makes me terribly [crying emoji].