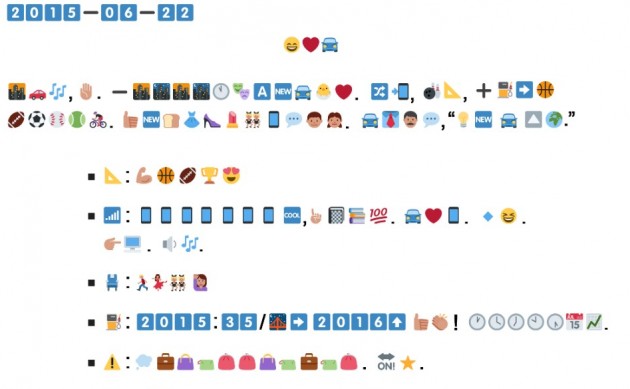 Yesterday, Chevy put out a press release about the 2016 Chevy Cruze that was written entirely in emojis. It was stupid, but it was also paired with a series of videos starring Norm Macdonald, which made it a bit better.

Anyway, today they’ve “decoded” the full PR, which can be read below. The main revelations: the new Cruze will debut tomorrow, June 24, 2015, at the Filmore Theatre in Detroit at 7:00pm; it will go on sale globally in Spring of 2016; it will feature improved fuel economy; and it can support up to seven connected devices with available 4G LTE WiFi, while also being the first vehicle in its class to offer compatibility with Apple CarPlay and Android Auto (so much #connectivity!).

Here’s the full text of the PR, which you can see in its original emoji-form here:

DETROIT — In two days at the Fillmore Theatre at 7 p.m., a new Cruze will be born and you are going to love it.

The all-new 2016 Cruze blends innovative technology, striking design and impressive efficiency into one sporty ride. It’s the best new thing since sliced bread for stylish and socially connected people. A Chevrolet spokesperson said: “We had the idea that the new Cruze could change the world.”

In conclusion, get ready to go places in your Cruze. It has the technology and fuel efficiency you need wrapped up in a fun ride. Prepare to fall in love.

Follow #ChevyGoesEmoji to learn more and join the fun!

Founded in 1911 in Detroit, Chevrolet is now one of the world’s largest car brands, doing business in more than 115 countries and selling around 4.8 million cars and trucks a year. Chevrolet provides customers with fuel-efficient vehicles that feature engaging performance, design that makes the heart beat, passive and active safety features and easy-to-use technology, all at a value. More information on Chevrolet models can be found at http://www.chevrolet.com.

Well, Millennials: do you feel like buying a Cruze yet?