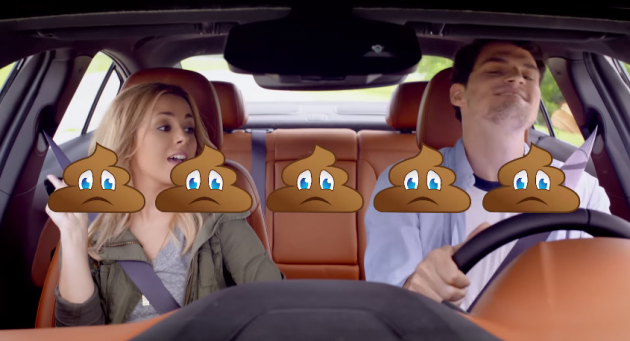 General Motors began the campaign by putting out a press release for the all-new sedan that was written entirely in emojis, which wasn’t a great start.

Then, the automaker posted a series of YouTube videos in which clueless old fogey Norm Macdonald has to translate the bizarre PR. Norm’s unable to decipher it, so he heads off to the (probably unaccredited) “Emoji Academy,” where professional young people Ashley Benson, Jamie Chung, and Disney Channel teen Zendaya tutor him on the language of emojis.

The videos weren’t exactly brilliant, but the use of Norm Macdonald—a 51-year-old comedian known for his cynical, caustic humor—lent them a touch of much-needed self-awareness.

Unfortunately, that ironic detachment is noticeably absent from the ad below, which Chevy commissioned YouTube star Julian Smith to direct and star in.

(To skip Julian’s long-winded introduction and just watch the ad, jump straight to the one-minute mark):

Back in February, Chevy was able to cram roughly 22 Millennial touchstones into their 30-second ad for the Trax. But here, with a full two and a half minutes of music video to play with, they really went to town.

Let’s see, we’ve got thrift store artwork; a PC being used to personify the evils of corporate life; heather sneakers with hilighter soles; a dude with a Macklemore haircut and plastic rimmed glasses; denim overalls; disdain for tech-illiterate parents; converses; extraneous use of the word “literally;” #EMOJIS; and a party in a warehouse that features silly string, a rope swing, and a food fight (Millennials being our country’s most aggressively nostalgic generation).

Perhaps Chevrolet thought that all of the bright colors/flannels would distract young people from the fact that this is a Cruze commercial without a Cruze in it. A quick look at the comments section, though, proves that’s not the case: 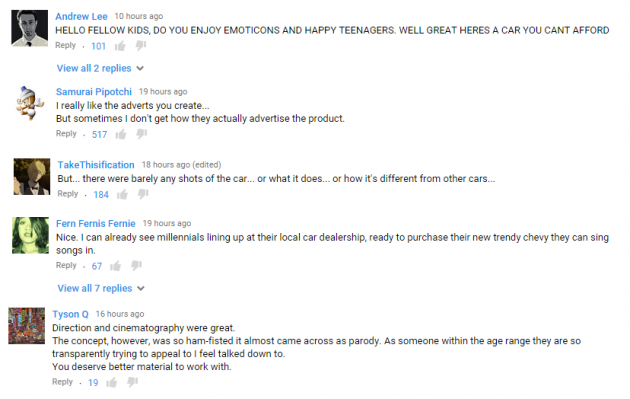 The kids aren’t alright (with this video)

Here’s the real shame of this: the 2016 Chevy Cruze looks to be a pretty good car! And it has lots of legitimate selling points that would appeal to Millennials—or, really, anyone in the market for a new sedan.

For starters, it looks better than the 2015 model (kids love style!), it gets better mileage (kids love to save money!), and yes, the available Apple CarPlay and Android Auto provide cutting-edge smartphone integration (kids… sigh… do love emojis…)

But instead of mentioning any of that—or even showing the standard seven-inch touchscreen where drivers can access their iPhone or Android apps—Julian chooses to sing an obnoxious song that’s punctuated by fake Apple emojis (we’re assuming that’s due to copyright issues).

“Mom, you are literally ruining emojis,” a flustered Tyler Oakley says at the end of this video. Replace “mom” with “Chevy,” and you’ve got a pretty valid complaint.