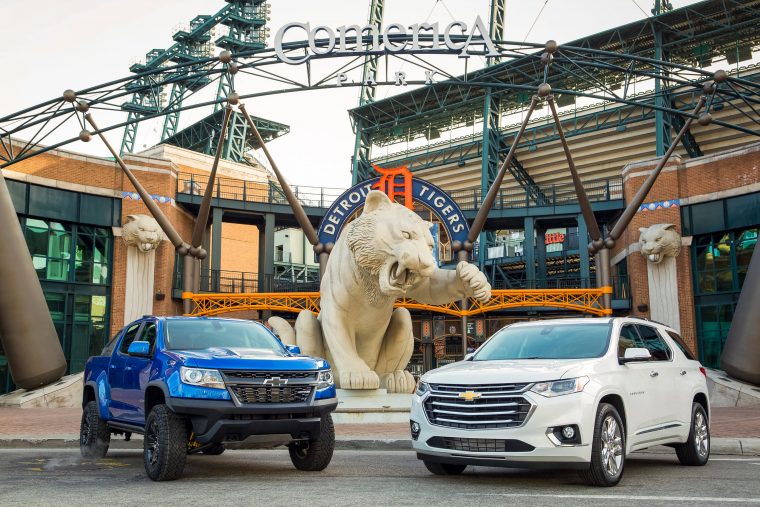 The true MVPs of the MLB season

Baseball season is almost set to begin, with Opening Day taking place on March 29. The 2018 season is especially exciting for the Detroit Tigers, as it marks the 5oth anniversary of their 1968 World Series Championship.

Fans of all ages will be in attendance as the Tigers take the field at Comerica Park. Furthermore, two Chevy vehicles will also be in the crowd.

Chevrolet at the Ball Game: Chevrolet rewards the Chicago Cubs

For the past nine seasons, Chevrolet has served as the official sponsor of the fountain, which comes alive with ornate water displays and the roar of a tiger every time the Tigers score a home run. As a part of the partnership, Chevy has historically placed vehicles near the top of the structure.

The Colorado and Traverse atop the iconic fountain at Comerica Park

“This year, we have chosen to display the all-new Traverse High Country and the Colorado ZR2 because they are among the most versatile and capable vehicles in the Chevrolet lineup,” explained Paul Edwards, U.S. vice president of Chevrolet Marketing. “We know that they are tough enough to withstand the unpredictable Michigan weather.”

That guarantee is backed by 200 hours of Climatic Wind Tunnel testing. Furthermore, the Colorado ZR2 and Traverse High Country were also exposed to extreme temperatures and humidity levels during their testing periods.

If you’re planning to take a trip to the Tigers’ opening day game later this week, keep an eye out for two of Chevy’s best vehicles atop the fountain at Comerica Park.