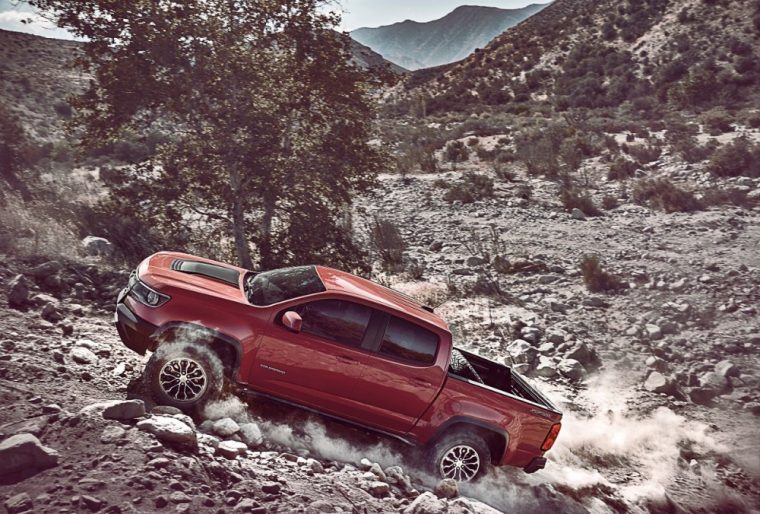 The 2017 Chevrolet Colorado ZR2 utilizes DSSV damper technology similar to what was featured in the Camaro Z28
Photo: © General Motors

Chevrolet recently took the cover off its new Colorado ZR2 off-road truck, and it looks like this high-performance pickup is taking direct aim at the Ford F-150 Raptor.

The Chevy Colorado ZR2 will come equipped with more off-road equipment than any of its competitors when it goes on sale next spring. Some of the most noteworthy details regarding this truck include the addition of modified front and rear bumpers, functional rockers, and a lifted suspension, not to mention its front and rear track have been expanded by more than three inches.

Adding to the truck’s off-road performance capabilities are front and rear electronic locking differentials. In addition, the Colorado ZR2 features the first off-road application of Multimatic Dynamic Suspensions Spool Valve dampers. These specialized shocks have also been used in the fifth-generation Camaro Z28, in the Ford GT performance car, and in Formula 1 cars. 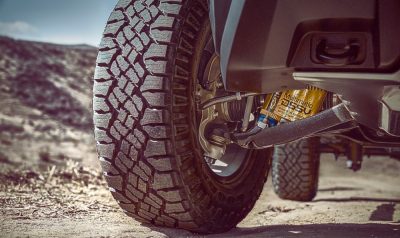 The spool-valve shocks were provided by Multimatic, which is a Canadian company that focuses on suspension and racing technology. Besides providing better cooling and amplified space for hydraulic oil and nitrogen, these unique shocks also contain a third spool valve, which is important because it creates better control over the suspension that’s needed in challenging off-road situations.

Powering the new ZR2 will be the same engine options that come with the standard version of the Colorado. These engines include a gasoline-powered 3.6-liter V6 rated at 308 horsepower and 275 lb-ft of torque, while the other available motor is a 2.8-liter Duramax diesel four-cylinder providing 181 horsepower and 369 lb-ft of torque. The gasoline-powered engine is paired with an eight-speed automatic, and the diesel engine works with a six-speed auto. Furthermore, the Colorado ZR2 will be able to two up to 5,000 pounds and carry 1,100 pounds in its bed.

When matched up against the Colorado Z71, it’s clear the new ZR2 has the more dynamic exterior design. Functional rocker panels, 17-inch aluminum wheels, and 31-inch Goodyear Duratrac off-road tires all come standard on the ZR2, while a bed-mounted spare tire is also available as an accessory.

Car and Driver has reported the Chevy Colorado ZR2 will feature a price tag of approximately $40,000. However, Chevrolet has yet to officially announce a starting MSRP for its new off-road truck. 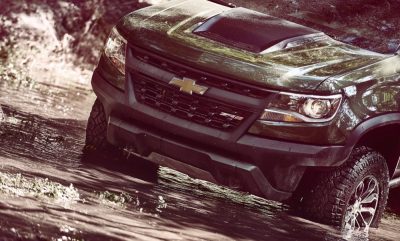 The one thing Chevy has confirmed about the Colorado ZR2 is that it will be the most versatile truck on the market when it’s released in the spring of 2017.

“Our engineers have been incredibly successful developing Corvette and Camaro performance variants with broad performance envelopes,” said Mark Reuss, executive vice president, Global Product Development, Purchasing and Supply Chain. “The ZR2 applies that same philosophy to off-road performance. You can go rock crawling on Saturday, desert running on Sunday, and comfortably drive to work on Monday. This truck can do it all, and do it all well.”