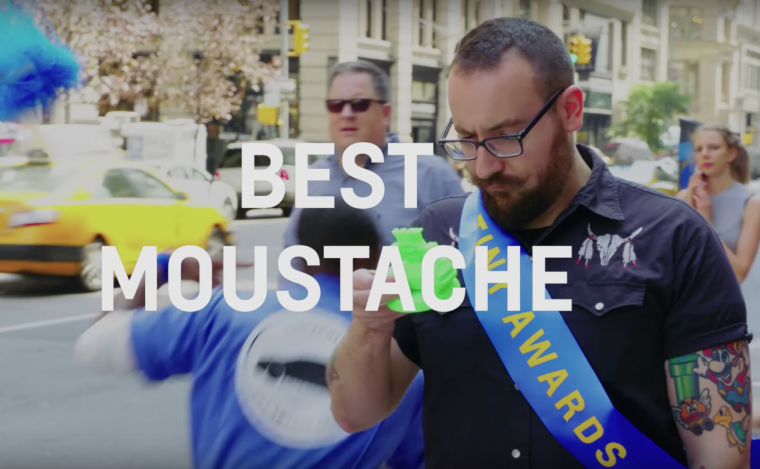 This man is either confused because some strangers just gave him an award for “Best Moustache,” or because he can’t figure out why he didn’t win for “Best Arm Tattoos”

First, the bowtie brand released “Small Talk,” a series of bite-sized chat show videos that comedian Al Madrigal hosted from inside of vehicles like the Spark and Sonic. Then there was “Small Victories,” its series of super-short videos celebrating minor achievements, like finding money in your couch cushions or parallel parking effectively.

And now Chevy is bringing us the “Tiny Awards”—miniature trophies given to random people on the street for achievements in such categories as “Best Mustache” and “Best Off Season Use of Socks.”

Chevy sent some people to Fifth Avenue in Manhattan to present the awards to some seriously confused New Yorkers:

The Tiny Awards seem to be the opposite of the Fashion Police—providing people with a sense of validation over their own personal style decisions, in the form of a little plastic car.

A second video provides more of the same, beginning with someone being recognized for “Best Flat Top” (shockingly, the winner of this award is neither Kid nor Play).

In terms of exclusivity and prestige, these trophies seem to fall somewhere in between a Nobel Prize and a “World’s Greatest Dad” coffee mug. We imagine that most recipients end up using their prize as a paperweight, though perhaps some of the winners take a lot of pride in their victory.

Then again, maybe they will end up coming in handy later on when it comes to settling arguments. (“Honey, what do you mean these pants look stupid? They’re AWARD-WINNING!”)