While to many October means haunted hayrides and DVRing Hocus Pocus to watch next weekend, the month also stands for breast cancer awareness. For the fourth year running, Chevy plans to fight breast cancer through various initiatives throughout October. In the last three years alone, the automaker has raised more than $3 million to battle the disease, but this year, the automaker aims to beat the $1.1 million raised last year for the American Cancer Society.

Among Chevy’s events for this month are its Making Strides Against Breast Cancer walks across the country, the biggest source of fundraising each year. The automaker will host a major walk in Detroit on October 11. Joining the cause yet again this year is the pink Chevy SS, which will pace caution laps three separate weekends for the NASCAR Sprint Cup Series; Chevy will donate $250 for every caution lap led. Chevy will also be donating $10 for every test drive taken at a dealership this month, up to $130,000. 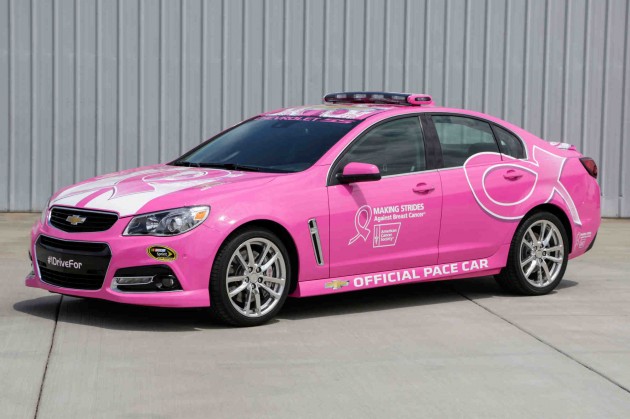 “When a friend or loved one is diagnosed with breast cancer, we tend to ask, ‘What can I do?’” said Paul Edwards, U.S. vice president, Chevrolet Marketing, and the man in charge of Chevy’s activities this time around. “Getting involved in a walk or making a donation is something we all can do to make a difference.”

The famous towers at GM’s Renaissance Center global headquarters will even glow in bands of pink all through October.

It is estimated at 40,000 women and even 430 men will die this year of breast cancer, the second most common cancer among American women. (Skin cancer is the most common.) That is why we at The News Wheel urge our readers to participate in yearly examinations to catch the disease before it is too late.