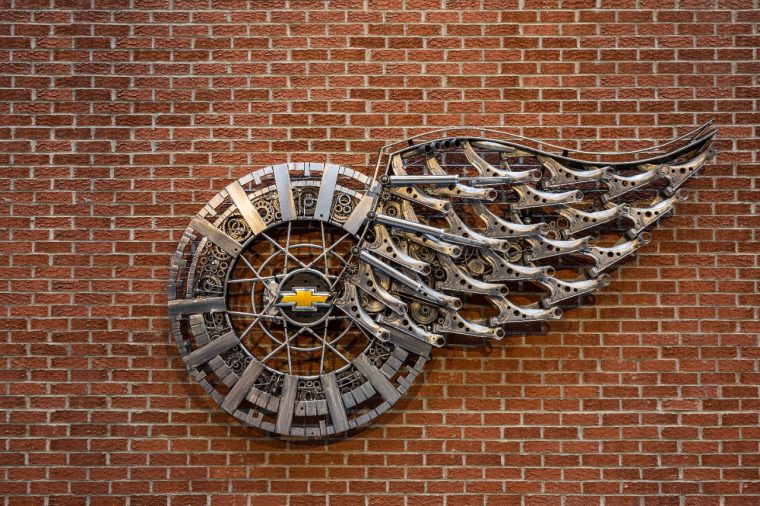 In something perhaps tantamount to a house-warming gift, Chevrolet has crafted a new sculpture, entitled “Wheels & Wings: A Chevrolet Tribute to the Iconic Detroit Red Wings ‘Winged Wheel’ Logo,” that will be on permanent display at the arena’s northeast entrance.

The sculpture stands 9’5” tall and was built by former motorcycle stunt rider Tomas Vitanovsky. The Czech Republic native spent some 700 hours on the sculpture from conception to fit and finish. Appropriately, a number of disused Chevy pieces were made part of the final product, including a 1918 Chevy hubcap and a Bowtie emblem from a Silverado. 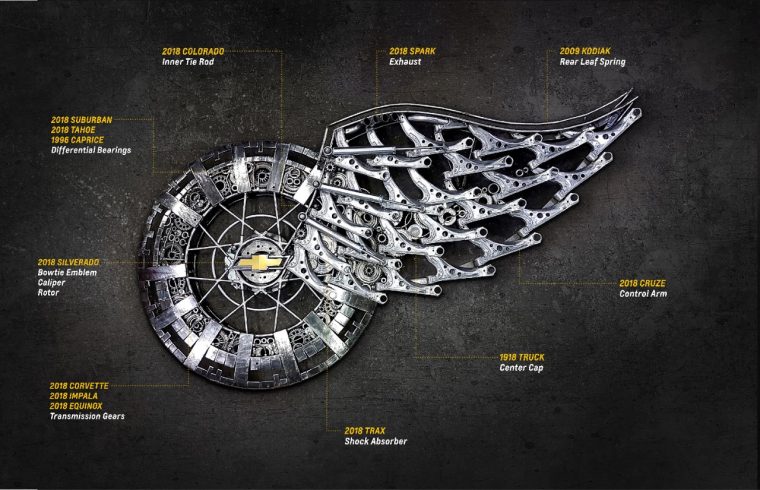 “The chance to create a sculpture so complex and to partner with Chevrolet was truly a thrill that I won’t forget,” Vitanovsky said. “Stitching together the 186 parts from Chevrolet vehicles to create this tribute to the famous Detroit Red Wings Winged Wheel logo was an exhilarating challenge and I am excited to see how the fans react when they see it on display in the new arena.”

“Chevrolet commissioned this unique sculpture as a tribute to the people and the industry that fuel the city of Detroit and to honor the Detroit Red Wings who have been a true symbol of grit and determination,” added Paul Edwards, US Vice President of Chevrolet Marketing. “Tomas Vitanovsky has demonstrated a talent for bringing together what seem to be very ordinary parts into a striking piece of industrial artwork that we are proud to share with the city.”

You can check out a time-lapse of the creation of “Wheels & Wings: A Chevrolet Tribute to the Iconic Detroit Red Wings ‘Winged Wheel’ Logo” below.