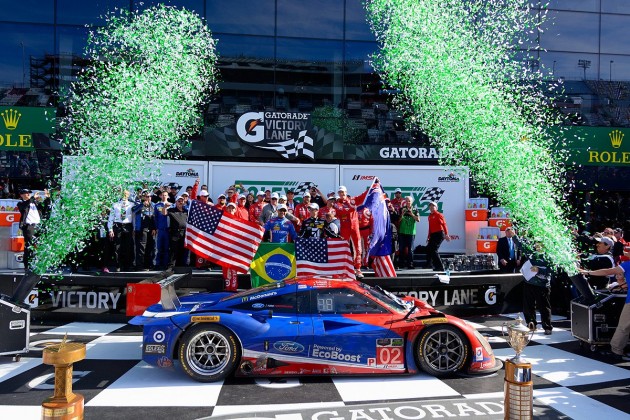 The driver lineup behind Chip Ganassi’s No. 02 Target Ford EcoBoost-Riley car should have been enough to tell the competition that he was coming to win the whole thing at the 2015 Rolex 24. In his employ: three-time IndyCar champ, Scott Dixon, 2010 Daytona 500 and 2014 Sprint All-Star Race winner, Jamie McMurray, 2013 Indy 500 winner, Tony Kanaan, and 2014 NASCAR Sprint Cup Series Rookie of the Year, Kyle Larson.

According to ESPN, people had taken to calling the No. 2 the “star car.” Ol’ Chip didn’t much care for that.

“I don’t know who named it, but I don’t approve of that name,” he said. “That’s like any other car on our team.”

Despite Chip’s protests, the No. 02 Target Ford EcoBoost-Riley was like anything but any other car on the track, winning the 2015 Rolex 24 thanks to deft driving and brilliant strategy.

“You have to look out for the car so you have the speed in the end to compete for the win,” said Dixon. “I can’t emphasize how big of a team effort this was – it’s not one person who wins this race, it’s everybody involved. This weekend, everybody on the No. 02 team did their best job, and that’s obviously enough to get a victory.”

2015 could prove to be a huge year for Ford on the track, particularly if it includes bringing the all-new Ford GT supercar to the Chip Ganassi Racing lineup.