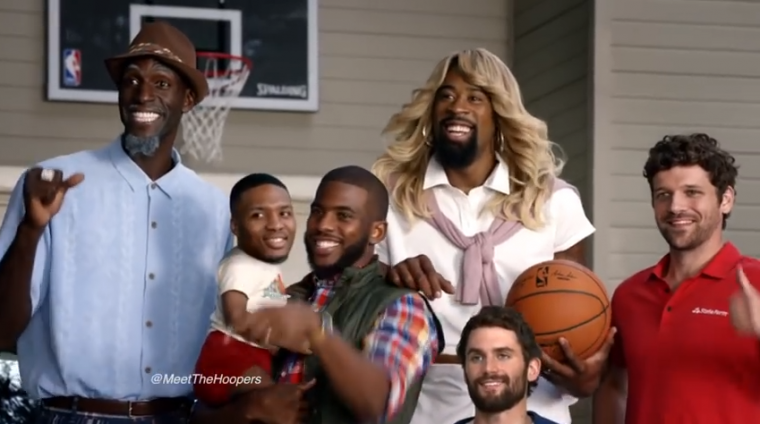 NBA player Chris Paul has been starring in State Farm commercials since 2012, when the Chris and “Cliff Paul” commercials officially made their debut. In the commercials, Chris Paul portrayed himself, as well as his fictional brother, who works as an agent at State Farm and “assists” people in a much different way than his basketball-playing brother.

DIY Car Care: Check out these tips on how to jump start a dead car battery

If you didn’t know, Paul’s real life teammate on the Los Angeles Clippers, DeAndre Jordan, agreed to sign with rival NBA team the Dallas Mavericks this past off-season, but he ultimately changed his mind at the last minute and returned to the Clippers. Many critics speculated Jordan was unhappy playing with the Clippers, due to a strained relationship with Paul, but that seems to be a thing of the past, as Jordan has joined Paul in a new State Farm commercial.

The new State Farm commercial, titled “Meet The Hoopers,” features a fictional sitcom theme song and introduces the Hooper family, which consists of five real-life NBA all-stars. Paul portrays Dad, Jordan plays Mom, Kevin Love is Son, Kevin Garnett does his best as Grampa, and Damian Lillard is the commercial’s breakout star for his hilarious portrayal of Baby. There’s also another character, simply called Neighbor, who is a State Farm agent and helps the Hooper family with their various issues.

After the theme song is done playing, DeAndre Jordan runs down the steps—wearing a blonde wig—and announces that somebody robbed the family of their rings, to which Paul says, “You ain’t got no rings.” Garnett—as Grampa—then kisses his ring and Damian Lillard—as Baby—proceeds to make fun of Mom’s lack of rings, until he is scolded. The State Farm agent then lets Jordan and Paul know that if they ever do get rings, State Farm can cover their jewelry in the event of a robbery.

In case you don’t pay much attention to the NBA, the joke is that Paul, Jordan, and Lillard have yet to win an NBA championship, while Garnett won a championship in ’08 with the Boston Celtics, which is why he kisses his ring. NBA team owners provide each player with a championship ring if they win the NBA Finals.

It’s good to see Paul and Jordan getting along, after their alleged rift over the summer. The two men definitely have a better shot at winning rings by playing together, than if they broke up like other Los Angeles power duos have done in the past.

Car Color Options: What does your car say about you?