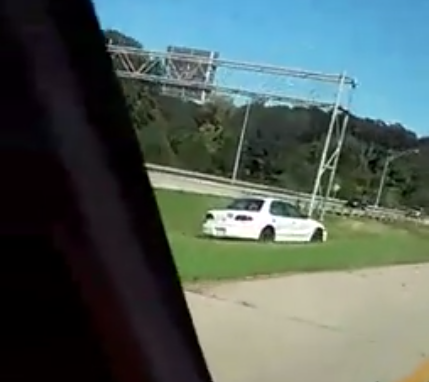 Sam Haynes recognized that the driver was impaired, finally convincing her to pull over to prevent any serious car crashes

The quick actions of a Cincinnati man earlier this week helped prevent what could have been a traffic catastrophe.

Sam Haynes, a 26-year-old construction worker, was driving home from work on Interstate I-275 in Cincinnati, Ohio Friday afternoon when he came across a car weaving in and out of lanes—even driving on the grass median. Upon witnessing this, Haynes decided to take action.

As he followed the car, Haynes took out his phone to film what was occurring. While the white Cavalier erratically changed lanes, leaving the road at times, Haynes called the police and explained to them the situation. Because of his quick actions, Haynes eventually got the woman to stop driving after yelling at her once she was slowly moving on the side of the road.

For all you dope fiends who thinks its ok to do what you do and drive, this is what you look like. Excuse my language.

When two sheriff’s deputies arrived on the scene, the woman, who was later identified as Sandra Harris of Mount Orab, Ohio, had already passed out. She was taken to an area hospital for treatment, after which she was later cited for driving under the influence.

Haynes mentioned during an interview that one of the main reasons for his heroic traffic stop was his sister, Lindsey. Lindsey was in a coma for several months in 2009 after a car crash, which occurred less than two miles from the Haynes’ Amelia home. Now, Lindsey uses a wheelchair to get around. Sam Haynes wanted to ensure the impaired driver did not cause a similar fate for someone else.