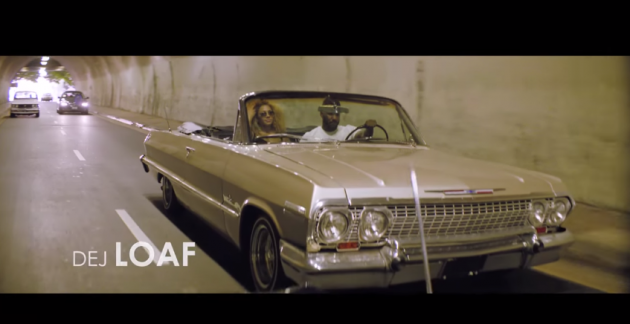 Rappers Game and Dej Loaf cruise around in a 1963 Impala for the “Ryda” music video.

If you had to count the number of times the rapper Game has referenced Chevy Impalas in his rhymes, then you would be counting for a very long time because it’s one of the things he’s kind of known for.

The multi-platinum-selling recording artist is back showing love for old-school Impalas. This time he does it in the music video for his new song “Ryda,” featuring Detroit’s own Dej Loaf.

The video starts with the pair being arrested, which sets up a flashback of the events that led them into that sticky situation. Game drives through the neighborhood to pick up Dej in his classic Impala and takes her out to lunch. Next, they visit the strip club, and then they casually decide to steal an armored truck.

The video transitions to a shot of the duo standing inside of a dark building, where they use explosives to blow open the doors to the truck – causing the money to float around in the air and slowly fall down all around them, the twosome are all smiles at this point – of course.

The video concludes with the scene that started the video, which shows the two about to be arrested. This is the point where we get blessed with some great shots of the 1963 masterpiece. The screen fades to black, gun shots are heard, and “to be continued” appears across the screen.

Thankfully it is all just pretend.

Game would never allow his beloved Impala to get a scratch on it – much less a bullet hole.