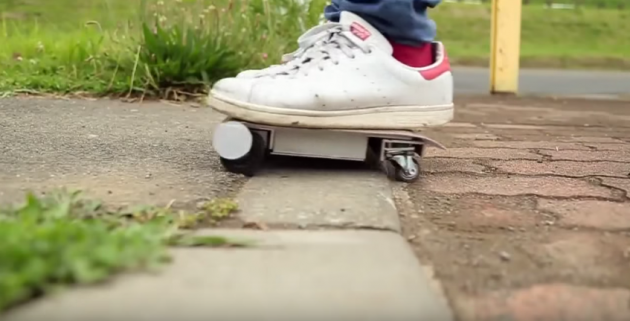 The WalkCar becomes more impressive after watching its promo video included in this article
Photo: Cocoa Motors via YouTube

The idea that you could drive your car to work, then stash the vehicle inside your backpack until you need it again, sounds pretty ridiculous, right?

Twenty-six-year-old Koniato Saito and his crew at Cocoa Motors certainly didn’t find the idea too preposterous, as they’ve recently accomplish the exploit with their new invention, the WalkCar.

The WalkCar is a portable vehicle most comparable to a segway, but it is much smaller, featuring a maximum weight of only 6.6 pounds, and is the size of a laptop computer, so you can put it in a large purse or backpack when it’s not in use.

Video: The ultra-compact WalkCar in action

The aluminum WalkCar is powered by a built-in lithium battery that takes three hours to charge via USB and features an impressive range of 7.5 miles. The tiny vehicle can support up to 265 pounds and is powerful enough to push a wheelchair up a hill, which can be viewed in the video above.

Steering of the small device is accomplished by simply shifting your weight. Acceleration is activated by stepping on the vehicle, while stepping off forces it to stop. The WalkCar is reported to have a top-speed of 6.2 mph.

The WalkCar is not yet for sale, but it will be featured in a crowdfunding campaign starting this October via the website Kickstarter. People in the US can expect to get their hands on a production model by spring 2016. The WalkCar is expected to sport a price tag of approximately $800.