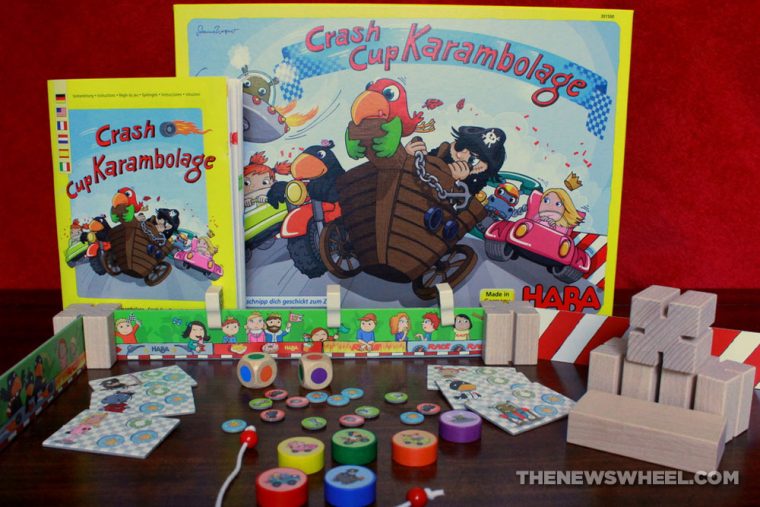 Most tabletop games involve strategy and/or luck, but a handful of games out there involve actual skill, too. Dexterity-based games may not be popular with the vast majority of adult gamers (who mostly associate it with Jenga), but they’re pretty common in the children’s arena–where players are developing fine motor skills. 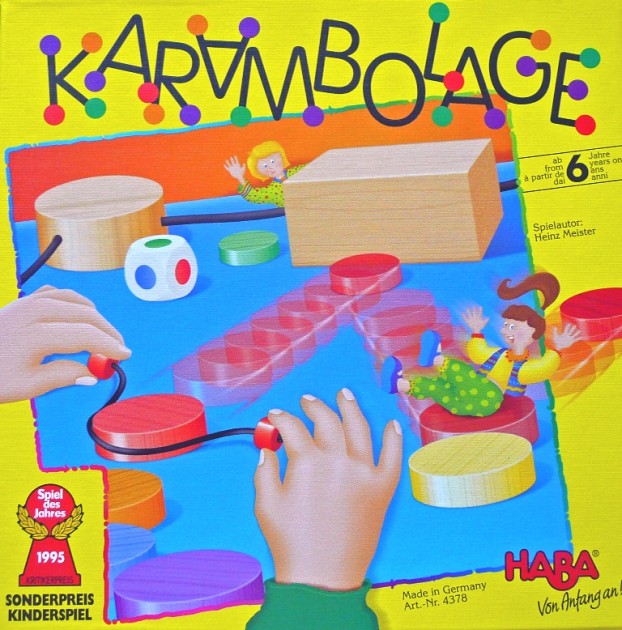 HABA, creator of many acclaimed children’s games and toys, recently released a dexterity game that combines the excitement of racing with the aesthetic of a children’s cartoon–in board game form. Crash Cup Karambolage is a challenging but imaginative and adaptable game that puts your token-flicking skills to the test.

The name Karambolage is German for carom, a term used in billiards for when one ball strikes another. Karambolage isn’t a new game. In fact, its original edition won the 1995 Kinderspiel award and has sold over 100,000 copies in Europe over the past two decades. Finally, Karambolage has been updated and re-released for international audiences as Crash Cup Karambolage, adding new components and challenges.

If You’re a NASCAR Fan…You’ll love this classic stock car racing board game! 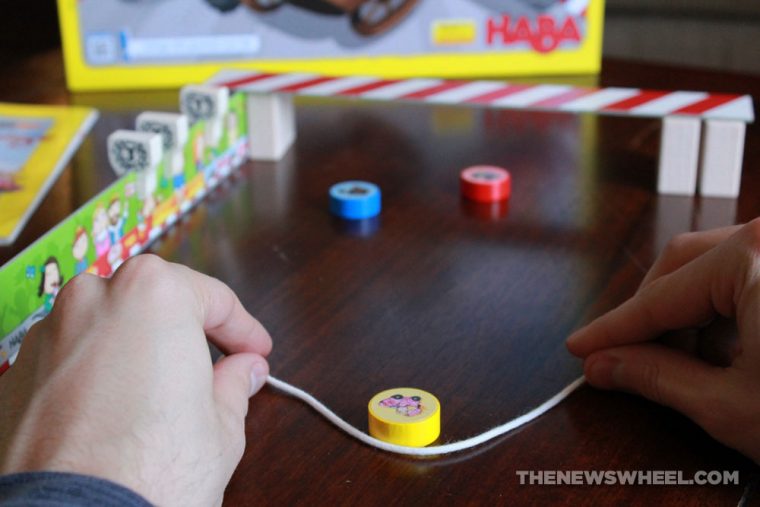 Crash Cup Karambolage offers three different layouts for the game components, each with a different set of directions. In all game variations, players use an elastic string to flick or bump their car (a round wooden token) around by pulling the string taut. The track layout, difficulty, and goal change with each version.

For an idea of how the game mechanics work, check out this easy-to-understand instructional video created by HABA: 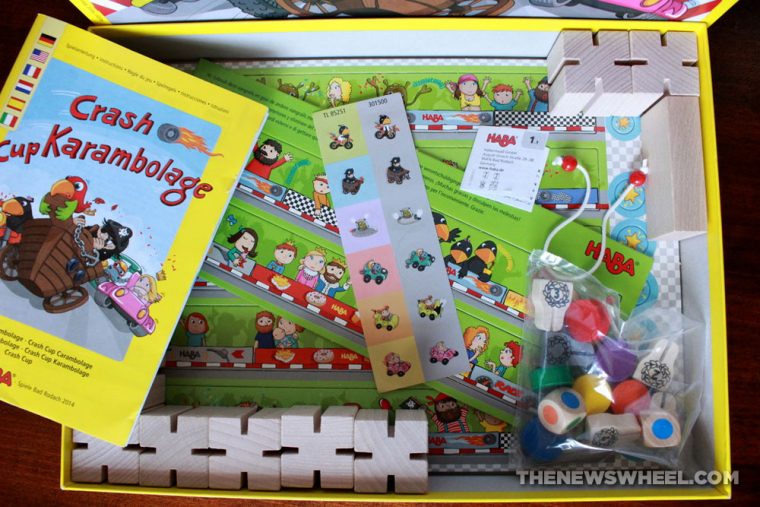 As with all of HABA’s games, the quality of the components is first-class. The cardboard is thick and vibrantly printed; the wooden pieces are solid and smooth; and the string (arguably the most important part) is durable enough to not be accidentally snapped in half. The beads on the end of the string are especially helpful when practicing the flicking technique.

Giving each car its own character (from a pirate to a hippo) wisely makes each piece unique, appealing to those young and old who like feeling that their game piece has an identity. Having spectators drawn on the borders also enhances the game’s human-centric appeal (rather than automotive).

One concern with the box is the packaging. Because there are no dividers within the box, the big, weighty blocks slide around and can damage the cardboard components. I had to add a baggie for the many small tokens and other items so they avoided getting crushed. If the game were re-printed, it would be nice if cardboard organizers were added inside the box, because there’s a lot of empty space in it.

Real Life Destruction: Read all you ever need to know about monster trucks in our beginner’s guide 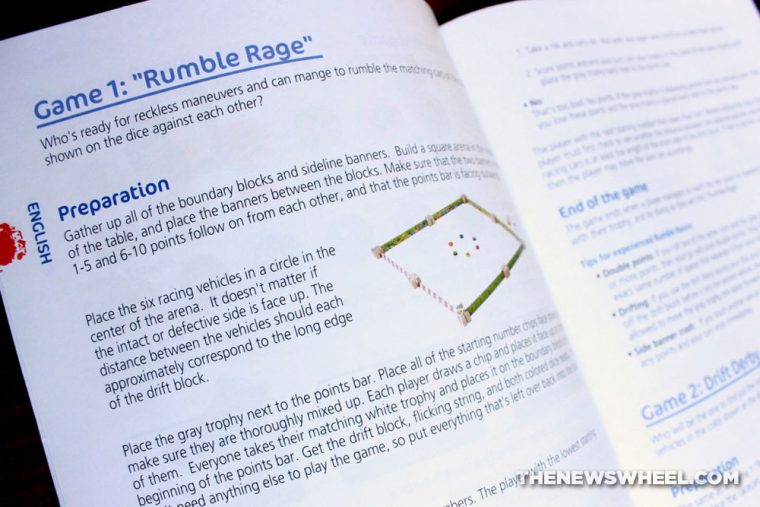 With three distinct versions of the game, movement technique advice, and character profiles, the instructions for Crash Cup Karambolage are lengthy and detailed. They’re primarily text-based, with few pictures accompanying the descriptions; but luckily the wording is clear, broken into short sentences and paragraphs. These will make the most sense if you set up the game and walk through it as you read. I also suggest watching the video from above to get an idea of the basics.

The challenge of Crash Cup Karambolage, however, doesn’t come from learning the game but from playing it.

Story Time: Your children will love this picture book about how cars are made! 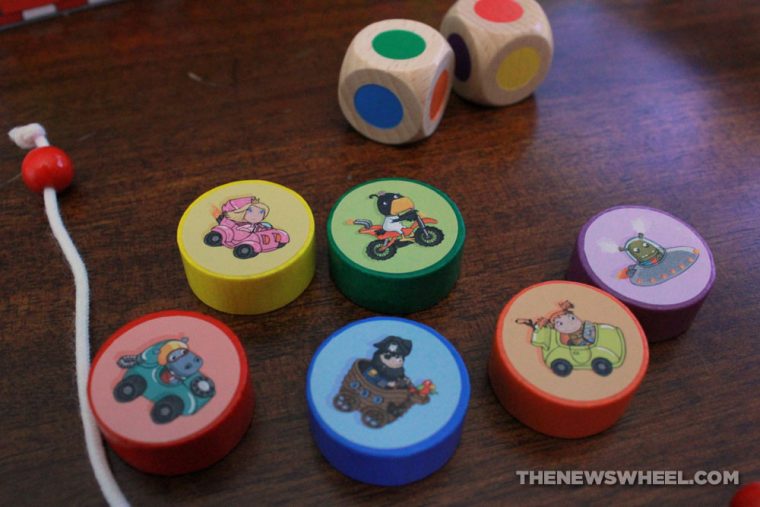 As an update to the original Karambolage, this re-vamp adds a lot of interesting elements like power-ups and damage tracking to make each experience scalable and unique. 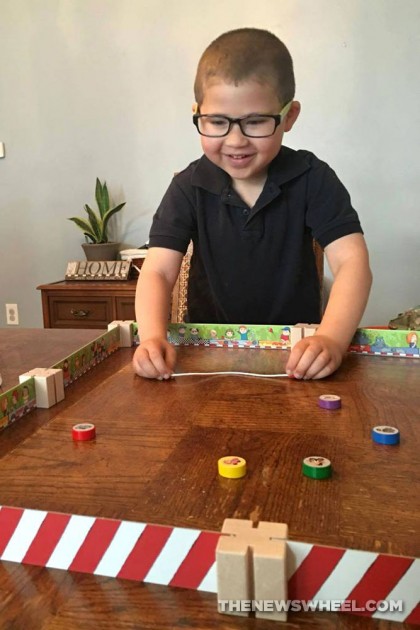 We gave all three variant games a shot with the junior testers (aka “youngsters”) and compared those experiences to those we had playing Crash Cup Karambolage with only adults. The Rumble Rage and Drift Derby versions were the most well-received by the youngsters, who enjoyed the simplicity and physical action of flinging the disks around. The Grand Prix proved too complicated and required too much set-up for young players. On the other hand, the adults found the race to be the most engaging (like a tabletop version of Mario Kart), but grew disinterested in the other two versions, which felt like warm-ups.

What we learned was that it takes a LOT of skill to win, which might frustrate casual gamers or young ones who are struggling to master the delicate, precise nuances of movement. Even reaching the tokens without bumping into the boundaries or getting used to the traction on the table surface can be a challenge. Thus, there’s a big ability gap between players based on their age, development, and skills. 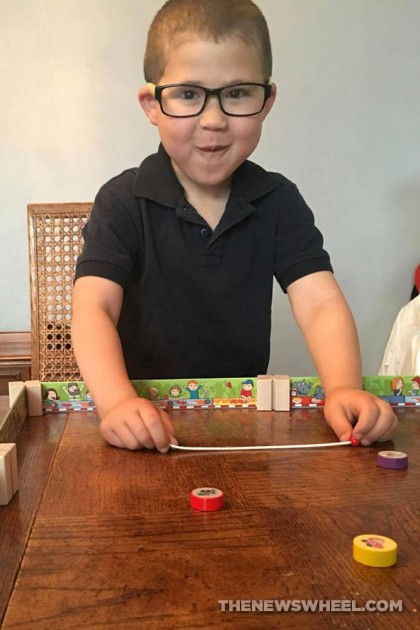 But, that’s the nature of games like Crash Cup Karambolage, which is how it should be.

If this sounds like the type of game you and your family will enjoy, we recommend you purchase it.  It’s incredibly affordable for the amount and quality of components included, and for the fact that you get multiple games in one. The box contents provide you with many extra barriers to create your own racetrack based on your ability level and preferences. For that reason, and for the ability to customize each race course, Crash Cup Karambolage has a lot of replay-ability.

Overall, Crash Cup Karambolage updates its original string-flicking mechanic with new racing elements to make the game more complex and engaging for older players. It’s exciting that this old game has been updated and re-released for a new generation. Young children may see these updates as unwanted and simply enjoy messing around with the cars, which is a testament to the innovation of using string, even 20 years later.

Crash Cup Karambolage is available for purchase through Amazon, Miniature Market, and the publisher’s website.

Product provided for review by publisher