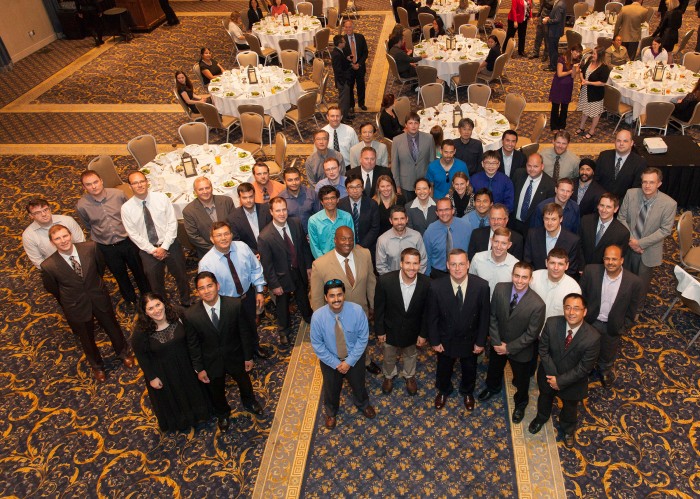 Toyota engineers and scientists gather to recognize the 1,355 patents that were awarded in 2013.

Toyota is pretty ahead of things when it comes to the future of automobiles. Just look at the Prius, which was the first ever mass-produced hybrid vehicle, and continues to be a hit with drivers 14 years after its debut in the year 2000. But, like every car manufacturer, research and development remains a huge priority, and Toyota proves to be ahead of the game year after year. In case you don’t believe me, check out these figures: in 2013, the US Patent and Trademark Office issued a total of 1,355 patents to Toyota engineers and scientists. That’s one heck of an impressive number!

Every year, Toyota Technical Center (TTC), which handles Research and Development and has offices in Ann Arbor and Saline, Michigan, holds an innovation awards ceremony to honor those who have received the most Toyota patents for their work in a given year. Last year, two team members (Mindy Zhang, manager-Toyota Research Institute, N.A., and Charon Lota, manager, electronic systems) tied for first place with 20 patents apiece.

Nigel Francis, Senior Automotive Advisor to the State of Michigan, commented, “The sheer number of patents received by Toyota engineers in Michigan is testimony to the ongoing importance of innovation both within Toyota and the state of Michigan. We are very grateful to have Toyota and its talented workforce in Michigan and glad that Toyota shares our vision that innovation is a strategic imperative in the automotive sector.”

Over the years, some seriously impressive designs have come out of TTC in Michigan. Today, we can thank the center for engineering and developing a plethora of top Toyota vehicles, including the Avalon, Camry, RAV4 EV, Sienna, Tacoma, Tundra, and Venza. Not a bad list at all!