A redditor named DonovanGypsy posted the image below to the subreddit r/creepy today, along with the caption “My mechanic asked ‘who else has been under your car lately?’” 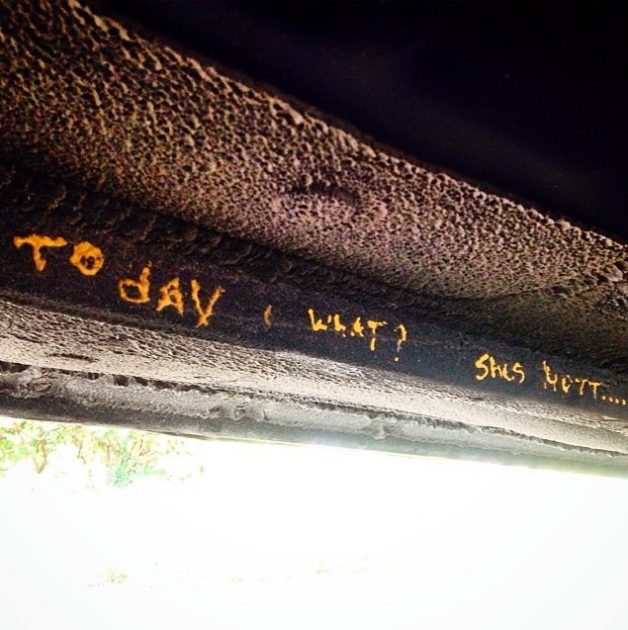 With over 1,800 upvotes, the photo shot to the very top of r/creepy, and even reached the front page of reddit. It also inspired us to write a fake Stephen King story, which we are calling Under the Chrome. Here’s a brief excerpt from the upcoming 678-page novel, which will sell 1,200,000 copies this summer before being adapted into a Frank Darabont film starring John Cusack as Bill and Morgan Freeman as the voice of the car.

“Bill checked his watch. He wasn’t scheduled to deliver the commencement speech at his alma mater until tomorrow afternoon, but he had wanted to get into Orono by dinnertime tonight so that he could have a hot slice at Pat’s Pizza and a drink or two or seven at the tavern, for old time’s sake.

Funny, he thought, how he was about to receive an honorary doctorate from the same school where a self-serious creative writing professor had once called his sophomore efforts “genre garbage.” Perhaps the English department had decided that trashy horror paperbacks can qualify as literature, after all.

More likely, the accounting department has decided that a bestselling novelist can probably afford to make some generous alumni donations, Bill thought to himself. Hell, why not, I’ve got the cash; probably even enough to get a whole damn building named after me. “The William F. Helms Memorial Hall for Trashy Literature” – it’s certainly got a nice ring to it.

Bill Helms had been about two hours from the University of Maine when the engine of his vintage Plymouth Fury started making a strange, disconcerting noise on I-95. He had taken the first exit he saw, to a small town called Derry, and been lucky enough to find a garage there that was open. The old mechanic working there raised up his auto on a car lift to take a look at it, while Bill puffed away on a Marlboro and waited for a diagnosis.

“Hey Sonny, didn’t you say you was a writah?” the old mechanic shouted from the garage. He wore greasy overalls that covered his sixty-five-year old body, a tattered Sox cap that covered his bald head, and liver spots that covered his blistered hands. A second-generation gearhead, Tom had worked at this shop since his father opened it up back in ’62. Tom was standing underneath Bill’s car, examining something seemingly benign yet curious.

“Yeah, that’s right,” Bill answered, throwing his spent cigarette on the ground, stamping it out, and walking over towards the old man.

“Well, is this your work right here?” Tom asked, his neck still craned as he stared up at the bottom of Bill’s cherry Fury. Furrowing his brow in confusion, Bill joined him underneath the car, looked up, and shuddered.

Scrawled in sickly yellow colored letters underneath his Plymouth’s front bumper were the words “TOdAY i WhAT? SheS HoTT….” Like the writings of a demented child, the words were meaningless on their face, and possessed no deeper significance that Bill could puzzle out. And yet, for some reason, they chilled him more than a death threat.

“Who else has been under your cah lately?” Tom asked.

Wow, that’s some spooky stuff. Can’t wait to see what Darabont does with it.