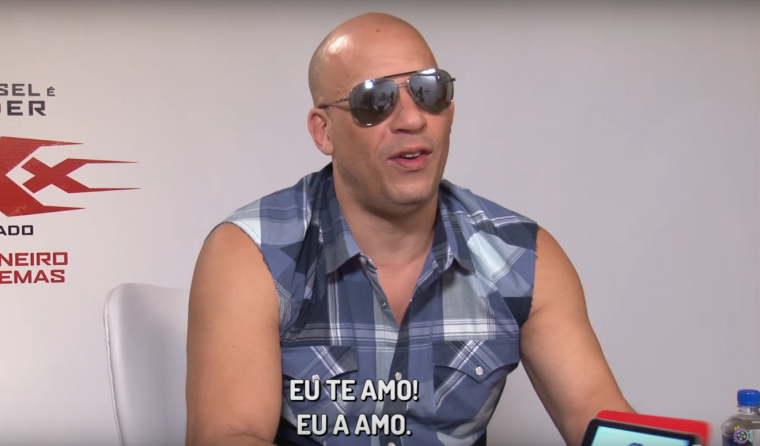 “I love you,” Vin Diesel says to interviewer Carol Moreira, who does not reciprocate

Fast and Furious star Vin Diesel got a little too fast with Brazilian interviewer Carol Moreira, whose awkward responses and strained smile imply that she was secretly furious with him.

The interview begins at the 1:20 mark, and begins getting really creepy at the 4:40 mark:

The Fast and the Luxurious: The best luxury cars on the market right now

While discussing the wisdom imparted to him by Tom Hanks when they worked together on Saving Private Ryan, Vin Diesel suddenly does a very un-Hanksian thing by stopping mid-sentence to note how beautiful his interviewer is.

Diesel brings up his intense (and intensely uncomfortable) physical attraction to his interviewer again (7:20 mark) when they are discussing the game Dungeons and Dragons (very smooth, Vin). Then later, just when the interview is about to end (11:20), Vin gets really unhinged, lamenting the fact that Moreira is just “too f**king sexy,” and wondering aloud, “when did this turn into Beautiful World?”

Some other amusing revelations from this interview include the story of Diesel’s first foray into acting (breaking into a theater as a child) and the fact that he spent ten years as a bouncer in New York. Also, Diesel initially didn’t want to do a sequel to The Fast and the Furious because he thought it would be akin to making a sequel to Rebel Without a Cause, which, lol.

Slow Down, Vin: Signs that you may need new brakes