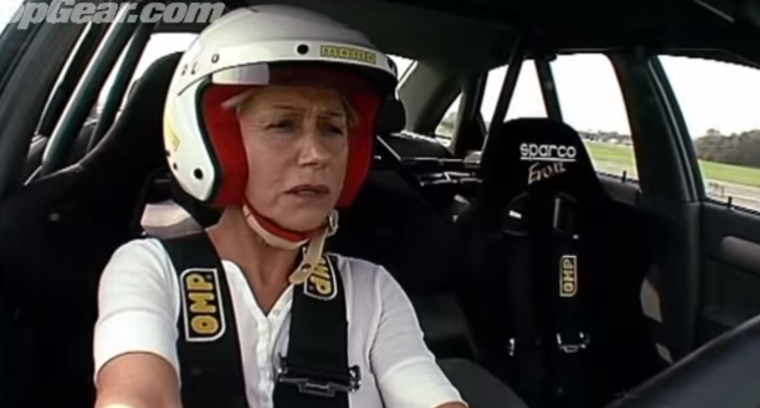 Helen Mirren runs an impressive 1.52.8 lap during her appearance on Top Gear

Last year, Helen Mirren told a Yahoo! interviewer that her “great ambition” was to star in a Fast and Furious film, adding that, “my claim to fame is I always do my own driving.”

Well, the 70-year old British acting legend’s dream will soon come partially true, when she gets to film a cameo in the upcoming Fast 8. Unfortunately, they’re not letting her behind the wheel during her one day on set.

“I wanted to be driving, but unfortunately, I’m not,” the disappointed Dame told Entertainment Weekly. “Maybe that will come in the future, in Fast and Furious 12.”

(That sounds a lot like the old joke about how Jaws 2 was the first movie sequel to not use Roman numerals in its title, but only because they were saving that for Jaws 11. Except in the case of the seemingly immortal Fast and Furious franchise, the thought of a twelfth movie seems more like an inevitability than an exaggeration.)

It doesn’t get better than this: Helen Mirren joins the Fast Family in #F8. 4.14.17 pic.twitter.com/wCSpu8FS3u

What gets the Academy Award-winning actress really riled up, though, is that she believes she could have totally lapped her male co-stars.

“I’m probably one of the few people on the set who know how to drive a gear shift car,” Mirren bragged. “I doubt the Rock knows… But I do. I know how to double declutch.”

Whoah, did you hear that? Do you smell what The Queen is cooking?! She just issued a royal beatdown to the Scorpion King himself!

Not only did Dame Helen dismissively refer to actor Dwayne Johnson by his former wrestling name, but she delivered a People’s Elbow right to his manhood by suggesting that he can’t even handle a manual transmission!

Bah Gawd, that man has a public persona to uphold!

Car Shopping: Learn about the benefits of leasing rather than buying