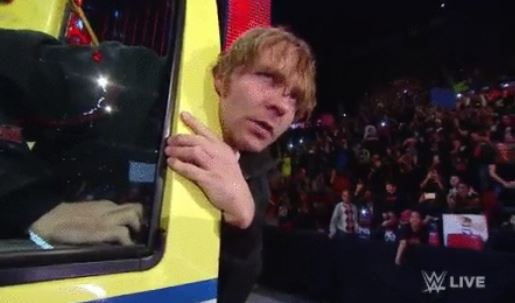 Earlier this afternoon, Brock Lesnar sent shockwaves through the WWE Universe and a very clear message to a formidable foe when he viciously attacked Dean Ambrose in the parking area at the Joe Louis Arena prior to tonight’s episode of Raw. Ambrose has been increasingly bold in his provocation of The Beast Incarnate in recent weeks, and after a brutal powerslam onto the windshield of a limousine landed Ambrose in a nearby medical facility, it seemed that Lesnar may have gotten the last laugh on The Lunatic Fringe.

And then Ambrose did this:

DEAN AMBROSE has found a way to arrive at @WWE #RAW — injury and all!!! @BrockLesnar @HeymanHustle pic.twitter.com/HDlelywqTr

Ambrose, unabated by injuries that left him in a neck brace, drove a Ford ambulance down to the ring. On hands and knees, he crawled down to the ring to challenge Lesnar, only for the former NCAA Heavyweight Champion to walk away. Whether it was hubris or insanity, Ambrose poked the bear by challenging him to a match at Wrestlemania, which Lesnar ostensibly accepted with an F5. His advocate Paul Heyman made that acceptance clear.

“My client ACCEPTS your challenge!” – @HeymanHustle

Sadly, the segment did not end with Brock smashing the ambulance with axes. The road to Wrestlemania is a long one, however, so there is hope for the weeks ahead.