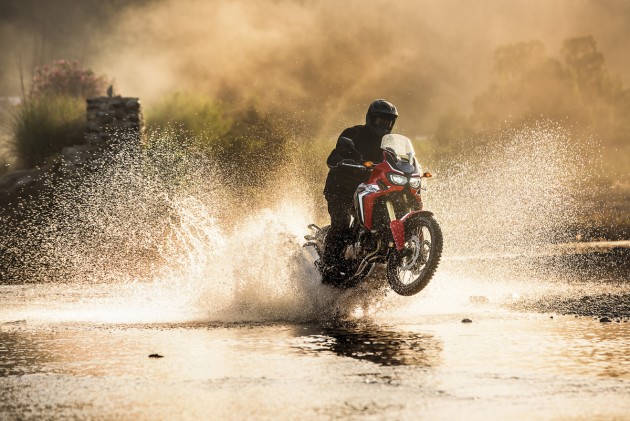 The long-awaited return of the Honda Africa Twin is upon us, with the new 2016 model set to hit showrooms in early 2016. Today, the Japanese automaker announced further technical details on the CRF1000L Africa Twin (more on that below the video).

There’s also a rather entertaining and well-produced video from Honda which shows Africa Twin engineers, riders, and others discussing the new motorcycle.

The 2016 Honda Africa Twin features an all-new 998 cc two-cylinder engine with a Unicam, 4-valve design and a 270-degree crankshaft. The motor yields 94 horsepower at 7,500 rpm and 72.3 lb-ft of torque at 6,000 rpm, and is mated to a six-speed gearbox, equipped with an assist slipper clutch. Honda says this powertrain is capable of 248.5 miles on a full tank (5 gallons).

The 21-inch front and 18-inch rear wheels with tubed tires are built for off-roading. The previoiusly-announced new Dual Clutch Transmission is also optimized for off-roading. In addition to the fully automatic D-mode, the S-mode option enables the rider to shift serially through the gears via two buttons on the left handlebars. Using the G switch on the instrument panel enhances off-road capability by reducing the amount of clutch slip during gear changes.

The new bike’s ground clearance is 9.8 inches, and its wet weight is 503 lbs in standard trim, 512 lbs in the ABS trim, and 533 lbs for the DCT version. Those latter two trims will also come standard with Honda Selectable Torque Control system, a traction control that adjusts to three different levels.

More details should be forthcoming.