Did You Catch Archie’s Jalopy in the ‘Riverdale’ Season 3 Trailer? 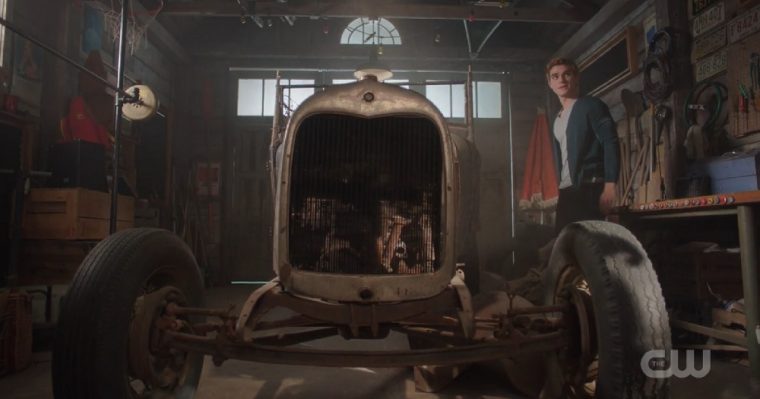 At the end of the Riverdale season two episode “Chapter Thirty: The Noose Tightens,” Hiram Lodge gifts his boyfriend daughter’s boyfriend, Archie, a vintage Pontiac Firebird after the red-headed teen shows his loyalty to the felon businessman. When Archie’s father finds out about the sweet new ride, tensions rise between Fred and his offspring. But eventually, Archie realizes how horrible Hiram is and decides to “make his bones” by returning the Firebird and instead work on the old jalopy in the shed with his father.

True Archie Comics fans were delighted when Archie pulled the sheet off the rusted classic vehicle at the end of that season two episode and have been excited to see the jalopy in the upcoming new season. Last month, a sneak peek trailer for Riverdale’s third season was released, showcasing the jalopy being driven by Archie, with his pals in tow. Though it’s hard to tell what brand the jalopy is from that quick trailer, we might be able to get more clues once the new season drops on Oct. 11.

Riverdale has a history of including vintage vehicles in the show to move plot points along, with many of the main characters driving old-school rides, like Moose’s 1972 Dodge Dart Swinger or Miss Grundy’s Volkswagen Beetle. There was even a drag race between rival gangs of the Southside, featuring none other than Jughead Jones driving a ’69 Chevelle SS and Ghoulie gang member Malachi behind the wheel of a 1940s Ford Tudor Street Rod.

While there weren’t any other notable vehicles shown in the season three trailer, one of the episodes is titled, “The Great Escape,” so there’s sure to be some sort of sweet ride that’ll make an appearance. Until then, we’ll just have to enjoy shirtless KJ Apa driving around in an incredibly unsafe vehicle. (I didn’t see any seatbelts, did you?)