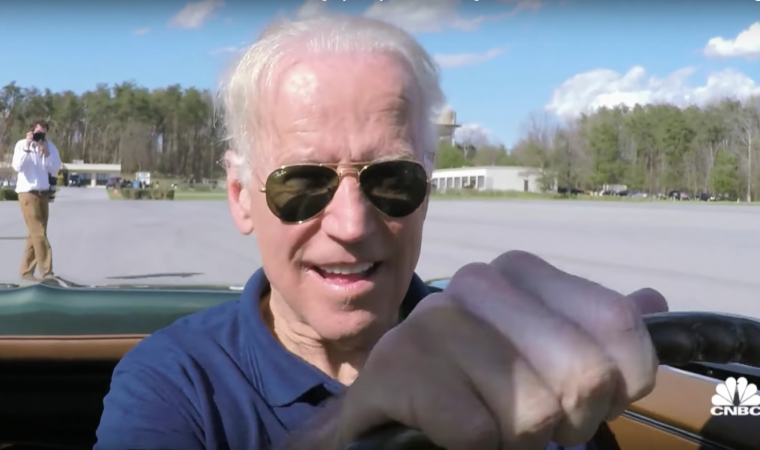 No matter which presidential ticket ends up in the White House after this election is over, it’s doubtful that either Clinton/Kaine or Trump/Pence will be able to match the current administration’s zeal for vintage Chevy Corvettes.

And that, my friends, is a shame for this great nation of ours.

For safety and security reasons, presidents and vice-presidents aren’t allowed to drive. But when they are allowed the rare privilege of getting behind the wheel, both Obama and Biden both prefer to do so in a classic Corvette… with a famous comedian riding shotgun.

Seriously! When Barack Obama got his chance to take a joyride, he did so in a 1963 Corvette Stingray, while Jerry Seinfeld sat next to him in the front seat.

And when he got the chance, Joe Biden drove a 1967 Corvette Stingray, with Jay Leno as his passenger.

On this sneak peek clip from the upcoming November 9th season premiere of Jay Leno’s Garage on CNBC, Biden immediately does a burnout in the classic Vette convertible, eager to feel the wind in his hair(plugs).

It should be noted that this is actually Biden’s car, and has been for quite some time (even though he hasn’t been allowed to drive it for the last eight years). The Corvette was actually a surprise wedding gift from his father, who owned a Chevy dealership in Delaware.

Biden’s love of America’s Sports Car is well-documented. Biden drove a C7 Corvette Stingray in a video for the 2014 White House Correspondents Dinner, which inspired the logo of the ill-fated “Ridin’ With Biden” campaign. Also, during a commencement speech at Yale University, he told those nerds that Corvettes are better than Porsches.

No matter who wins the election, this man will be missed.