Dinosaur Disrupts Traffic on the Isle of Wight

What do you get when a triceratops crosses the road?

A whole lotta havoc in the village of Godshill on the Isle of Wight in England.

Last Friday, a massive triceratops statue made its way into the middle of the road in Godshill. 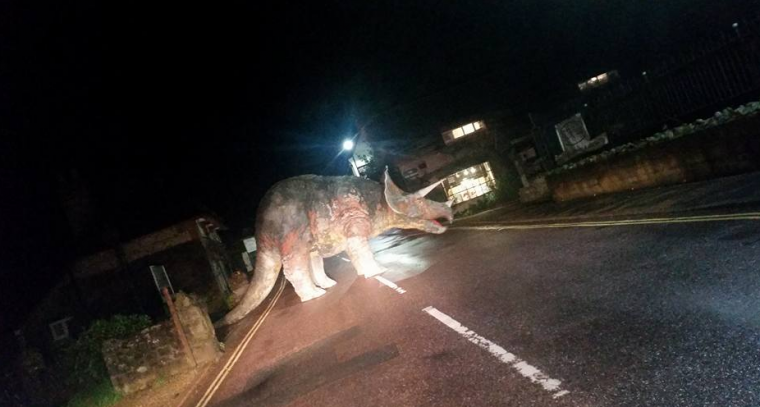 “That priceless moment when you’re driving home from work at 3am and the road is blocked by a 20ft Triceratops!!! #godblessbeer #someoneneedsamedal,” said local man Chris Hollingshead in a Facebook post that had the above picture.

The statue, which is known locally as Godshilla, shocked a number of drivers who likely thought they’d wandered onto the old set of Jurassic Park. Though the statue was obviously not dying, like the triceratops in the movie.

Luckily, the terrifying t-rex was nowhere in sight.

The majority of people in the village of Godshill were entertained by the matter, though.

In fact, you could say that they were only a tad annoyed that they had to tricera-stop.

Terrible jokes aside, according to Huffington Post, many of the patrons and staff at the local tavern were pretty sure they knew who had pulled the prank.

“It must be the same people who tied balloons round its neck and put tinsel over it for Christmas,” said Lisa Choi, The Taverners owner. “They’ve gone one step further this time.”

New EVs: Check out why Mitsubishi is changing up its electric lineup

The owner of Godshilla, Martin Simpson, is just happy for the publicity, though weary of the danger the dino could have caused. “It’s great people are talking about it,” said Simpson. “But I wouldn’t want to encourage anybody to cause a hazard for traffic.”

Simpson, who also owns a shop called Island Gems that sells gems and fossils, said it likely took five people to move the statue. Godshilla’s owner plans on painting him soon, and moving the dino to a fenced-in garden so he can’t wander off again.