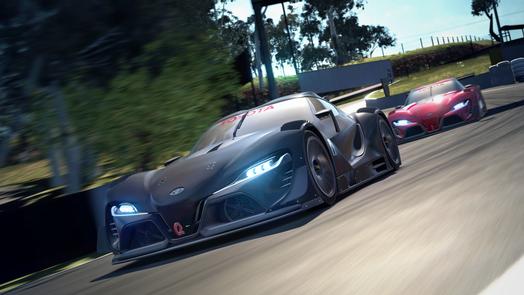 Your 21st birthday. The first time you saw your child walk unaided. Your wedding day. All days that will live on in your memory. But none will be as memorable as yesterday, September 16th, 2014. At least, that’s probably the case if you’re a fan of the Gran Turismo® gaming franchise. Yesterday marked the first day that the Toyota FT-1 Vision GT car was available for players to download in the latest game, Gran Turismo 6. [ See the FT-1 Vision GT in action below ]

Players are able to download the FT-1 Vision GT car right now and experience the excitement in (virtual) person. The Vision GT is based on the Toyota FT-1—a concept car that first appeared earlier this year during car show season. So far this year, we’ve seen the original, red version that graced Detroit and Chicago, and a more demure (but no less stunning) graphite version that made a splash at Pebble Beach. The FT-1 was designed by Toyota’s Calty Design Research, which also designed the Vision GT version for Gran Turismo 6.

The FT-1 Vision GT was designed to coincide with the game franchise’s 15th anniversary. When coming up with the design, Calty wanted to emulate how it would feel to drive the powerful FT-1 in a real-life race. As gamers who have already downloaded the vehicle have discovered, the FT-1 Vision GT is certainly not lacking in excitement.

Watch the video below to see the Ft-1 Vision GT in action on the track. And if you’ve already “driven” it, let us know in the comments how it felt!