Driverless Car Insurance: Is It Possible? 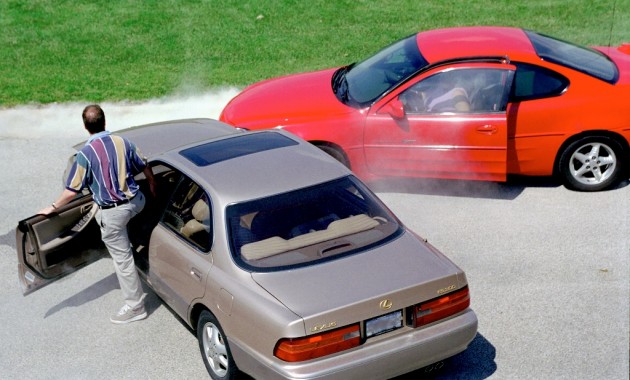 Car insurance is obviously necessary for situations like these… but what do we do about driverless cars?
Photo: State Farm

Driverless cars lived in the pages of science fiction for eons, until they were brought into reality by developers in Silicon Valley. Now, seemingly overnight, California has begun issuing self-driving car permits for manufacturers and Georgia has been vying for to be a pilot site for “autonomous vehicle design, development and testing.”

No longer are self-driving cars a far-off, fictional luxury. And their development is not only fulfilling geeky dreams but bringing along real-world dilemmas.

One of the first questions to be raised, which an entire industry hinges upon: how will driverless car insurance work?

Preparing for Autumn:Keep your car in top shape with our fall maintenance recommendations

What happens when a driverless car gets in an accident, especially if there’s no one at the helm of the vehicle? How does car insurance work then?

Will self-driving cars be insured the same way today’s cars are?

How much will driverless car insurance cost?

Will premiums continue to focus on driving history and personal incidents to calculate liability rates?

“It holds tremendous potential in terms of reducing human error, accidents and fatalities, but it also raises a lot of questions about what is the appropriate insurance product,” California Insurance Commissioner Dave Jones admitted.

Today’s $157 billion auto insurance industry thrives on human error as the cause of 90% of road accidents, according to the International Organization for Road Accident Prevention. Self-driving cars remove that primary contributor, as little to no human control means no road rage, no distracted drivers, no speeding, no running red lights, no tailgating. If that’s our future, crashes on the roads could be significantly reduced.

A recent study by RAND Corp. asserts that if automated vehicles do in fact reduce the risk and total amount of accidents, the industry could see a “significant reduction in insurance premiums.” While that might sound thrilling to most of us, it’ll force the entire framework to adjust for driverless car insurance. Likely, insurance companies will find other ways to bring in money by changing their approach.

Business Week theorizes, “In writing driverless insurance policies, underwriters will likely focus on the make and model of a car instead of a driver’s accident history or how often he drives. There may also be the introduction of “black boxes,” data recorders akin to those found in airplanes that can track car data and decipher what really happened seconds before a crash.”

Another underlying concern is if a driverless car can even be considered a car.

“It has no steering wheel. It has no brakes. It just has a destination panel and a start button,” Sedgwick LLP Attorney Hilary Rowen stated. “If you program the car to take your 8-year-old to school and it trundles off to school, drops your 8-year-old, and then comes back by itself, it’s not clear that it’s acting, in at least our common sense definition of an automobile,” Rowen said. “It’s a robot. It’s clearly a robot, and the only question would be whether it’s a street legal robot.”

Rowen has a valid point, as some are suggesting that the United States create a Federal Robotics Commission to address the increasingly high tech nature of automobiles and the legal/regulatory impact of computerization.

As DMVs across America, beginning with California, face the dilemma of regulating self-driving cars, the nation as a whole must decide what to do about driverless car insurance. For now, we’ll continue waiting for answers as more questions are raised.