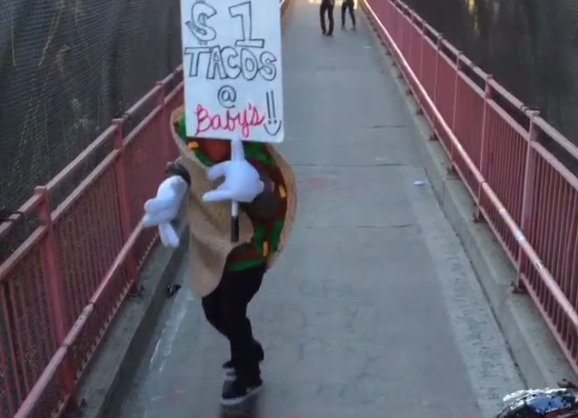 It’s not every day that you see a drunken skateboarding taco go speeding into New York City traffic, so treasure this moment:

The incident above was a promotional stunt gone horribly right. The mobile Mexican meal was advertising the daily $1 taco happy hour special at Baby’s All Right, a bar in South Williamsburg, Brooklyn. The taco’s human filling was Baby’s employee Jon Newport, who was being filmed by co-worker Ben Wilkes.

Wilkes admits he was a little nervous when he saw how quickly Newport was skateboarding through the Williamsburg Bridge’s pedestrian ramp, but figured he knew what he was doing.

Newport had been drinking for about three hours prior to filming the Instagram video, which likely helps explain why he crashed into the car. Of course, it also likely helps explain why, after the collision, he simply stood up and started laughing. As Homer Simpson once said, alcohol truly is the cause of and solution to all of life’s problems.

Both the car and the taco were uninjured, although the skateboard did break. Fortunately, Newport should be able to afford a new one, since his daredevil antics earned him a promotion.

Once he has a new board, Newport’s looking forward to doing something similar again soon.

If the taco is really eager to outdo himself with his next death-defying stunt, he should consider jumping Springfield Gorge.