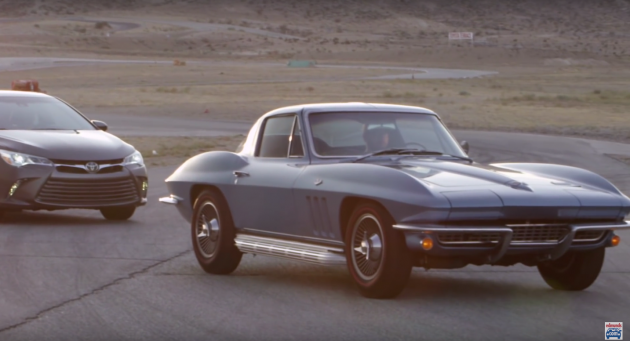 After recently comparing the Honda Odyssey to the (fictional) Tartan Prancer minivan, Edmunds.com has come up with an even stranger showdown: a 1966 C2 Corvette vs. a 2015 Toyota Camry.

It’s an odd pairing, for sure. One is a classic sports car and the other is a modern, well, “appliance,” to use Edmunds’ own terminology. But that’s sort of the point—after fifty years, a Camry’s V6 (268 hp) is comparable to a ’66 Corvette’s V8.

So, how does the driving experience compare? Take a look:

So does the Toyota Camry “win” the competition? Not really.

As the driver notes, it’s not very surprising that fifty years of advancements in engineering would make the Camry faster than the Corvette. But time and technology can’t make the Camry more fun, and that’s where the Corvette still excels after all these years.