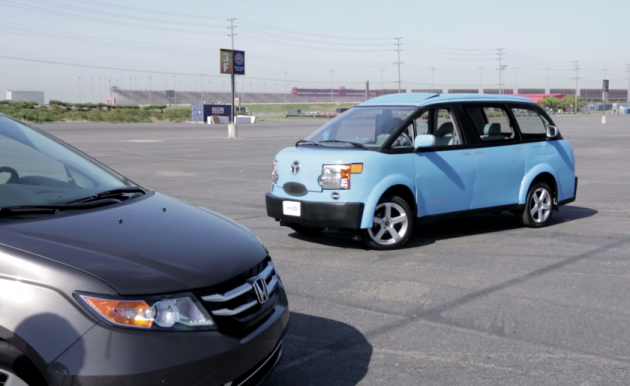 It’s Honda Odyssey  vs. Tartan Prancer in one of the most lopsided battles in automotive history

The original National Lampoon’s Vacation is one of the all-time great road trip comedies; a funny and genuinely clever satire of middle-class America. The trailer for this year’s sequel/remake, Vacation, doesn’t look quite as promising, though, as the humor on display feels overly self-referential and heavily reliant on gross-out gags.

But no matter how bad the film may or may not turn out to be, we can always be thankful for the hilarious (and fictitious) vehicle it’s produced: the “Tartan Prancer.”

In advertisements for the film, Ed Helms calls the Prancer “the Honda of Albania,” and what better way to test that claim than by pitting the car against a Honda Odyssey? That’s exactly what Edmunds.com did in this very funny comparison video:

In the 1983 Vacation film, the Griswold family’s (also fake) wood-paneled Wagon Queen Family Truckster was a pitch-perfect parody of the kind of ugly, oversized station wagons that American automakers were churning out at the time. The new Tartan Prancer, though, is a send-up of tube-shaped foreign minivans, most notably the Toyota Previa, with some gratuitous, overly-complicated features thrown in for good measure.

Calling the Odyssey “the standard against which all minivans must be judged,” Edmunds.com’s Road Test Editor Carlos Lago compares and contrasts Honda’s bestselling minivan with the Prancer, finding the Odyssey to be objectively better in every way—but who wants that? After all, Tartan Motors’ Prancer LE boasts a four-corner air-adjustable suspension, a brisk 15.9 second 0-60 mph time, and… buttons! Lots of ’em!

Sure, this whole thing may just be an advertisement for Honda’s Odyssey and Warner Bros.’ Vacation movie, but it’s a pretty funny one.

Goldstein says the fictitious automobile was nearly named the Tartan “Squirt” or “Vahgeena,” which seems pretty in keeping with the quality of jokes on display in the film’s trailer. Once it’s released on July 29th, Vacation may turn out to be pretty eye-roll-inducing, but at least it will have given us this genuinely head-turning vehicle.