Egyptian President Rolls Out Red Carpet for His Own Motorcade; Egyptians Not Pleased 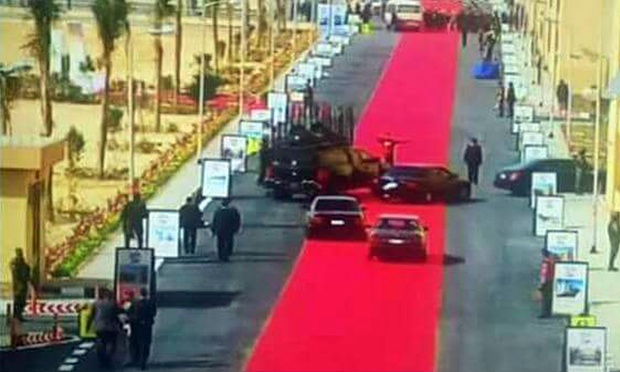 To put it extremely mildly, Egypt has been having some problems with money ever since the revolution of 2011. Political instability in the area has hit the tourism industry and foreign investments hard, leading to falling reserves of foreign currency, and Egypt’s economy has simply been declining, leading to state high unemployment and soaring public debt as Egypt has to depend more and more on foreign aid.

Even worse news for Egypt lately is the decline in oil prices, which count for 40% of Egypt’s exports, according to Al Jezeera. It is now feared that Egypt’s currency shortage could continue spiraling the economy downward.

All of this makes it very surprising that Egyptian president Abdel-Fatah al-Sisi literally rolled out a 2.5-mile red carpet for his motorcade to travel down on the way to open a public housing project.

As The Guardian points out, the people of Egypt are enraged at the president’s apparent show of wealth by rolling out the red carpet just for his car (especially since he has been preaching economic frugality).

In response, the state’s Brigadier General has made a circuit of several talk shows to explain that the carpet is over three years old (and so purchased by the previous administration that Sisi’s government overthrew), and was used in this instance because, “It gives a kind of joy and assurance to the Egyptian citizen that our people and our land and our armed forces are always capable of organizing anything in a proper manner. It is laid out in a way to beautify the general area, so it gives a good impression of the celebration that is being broadcast to the whole world.”

However, with Egyptian papers running headlines such as “How is the president asking us to tighten out belts while the 4km red carpet says otherwise?”, it seems the red carpet was probably a bit much.