Eleanor Norton Holmes Parks as Well as She Votes 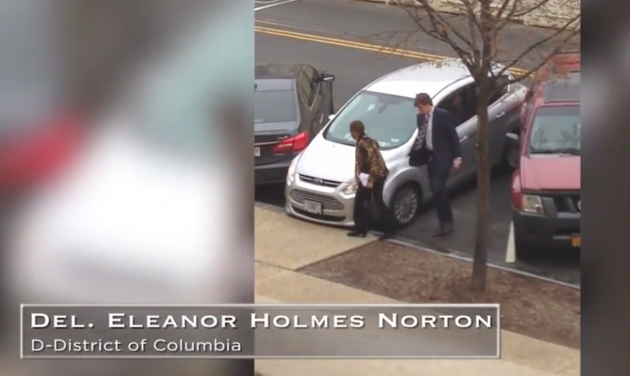 New video evidence has emerged which seems to prove that congresswoman Eleanor Holmes Norton parks about as well as she votes—which is to say, she is fundamentally incapable of parking.

“If she parks like that she should not be a member of Congress anymore,” jokes one of the anonymous tipsters who filmed the poor parking job and sent it to Roll Call’s gossip blog, Heard on the Hill. After bumping the (correctly parked) red car next to her multiple times, Representative Norton does not appear to leave a note.

Her office, though, disputes that interpretation of the video.

“After the Congresswoman parked her car, we assessed the cars on either side to see if there was any damage. We could not find any,” a Norton aide told HOH. “But we left a note with a business card so the congresswoman could be contacted in case we missed any.”

It’s too bad that The Colbert Report is no longer on the air, as Stephen Colbert would probably take great pleasure in mocking Holmes, his “arch-nemesis,” over this embarrassing incident:

Smart Driving: How Potholes are Formed and How to Avoid Them

News Source: Heard on the Hill