Electric Car History: The Early Oldsmobile Electrics That Almost Were

You know what’s fun? Electric car history. For example, did you know that Oldsmobile, the long-time General Motors brand founded in 1897, almost staked its existence just on electric vehicles?

More GM History: Do you know the history of the Chevy Colorado?

The Olds Motor Vehicle Company kicked off in August, 1897, as founder Ransom E. Olds started developing a gas car. However, one year into this venture, Olds needed a new plan. His gas cars were complicated, prone to problems, and too expensive to sell. He decided to make a simpler single-cylinder gas vehicle, but still faced slow sales at $1,000 a unit. 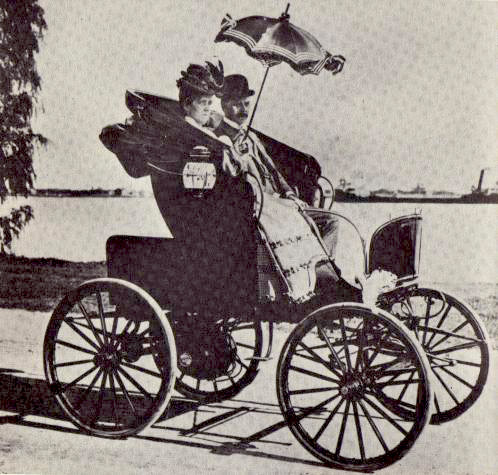 Olds and his wife in an 1899 Olds Electric Stanhope
Photo: Outright Olds

Olds decided that the company needed to take an electric turn. It is an easy-to-forget fact that around the turn of the century, electric cars were a huge part of the market, and were both simpler and more reliable than gas vehicles. Olds reckoned that he could sell a line of electric cars while he worked on developing simpler and less expensive gas cars.

These models did indeed buoy sales somewhat, although they were limited again by price. Despite this, Olds seemed to believe in the technology, and invested a large amount in ordering parts and in outfitting a section of his factory to mass produce electric vehicles. He even drew up plans for several new EVs.

We will never know how that went, though, because before significant production could start, the factory caught fire. In the ensuing blaze, the only vehicle saved was a gas-powered model called the Curved Dash. As new spread, public interest grew, particularly in the Curved Dash. The Olds Motor Vehicle Company gave up their electric aspirations.

There is an echo that survives of the Olds electric vehicle program, in the form of the only electric Olds in development to avoid the blaze by being out of the factory: a four-passenger Olds “Phaeton.” The Phaeton was recovered in the 1960s from a Lansing, Michigan barn, and came with all of the features you would have wanted. It had patent leather mudguards and dashboards, nickel trim on any exposed hardware, plush goatskin leather upholstery, a sterling silver control arm and tiller, and a lacquered black wooden body with gold hand striping and purple cloth trim bands around the edges of exposed seat sides.