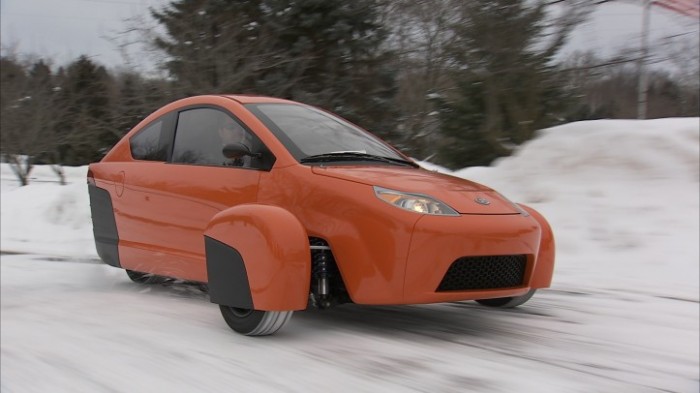 The Elio tackles the snow

City driving can be a giant pain in the rear. From dealing with all the jerks on the road to finding a sizeable parking spot close to your ultimate destination, sometimes it seems easier just to walk. Most city dwellers know that the smaller the car, the easier city navigation will be, hence the existence of the Smart car and the Scion iQ, to name a few. But have you ever heard of the Elio? I hadn’t, until today. So if you’re as clueless as I was, allow me to enlighten you. [ See the Elio in action in the video below ]

The Elio is a two-seater, three-wheeler city car that its makers, Elio Motors, say will achieve 84 mpg on the highway and will cost only $6,800 when it makes it to production next year. The latest pre-production model is currently touring the U.S. and it’s causing quite a stir. From its bright orange exterior to its two-row single seats, the Elio offers a quirkiness and affordability that has caused more than 18,000 people (and counting) to put some of their hard-earned dollars down to reserve one of these bad boys.

Elio Motors has pushed back the release of the Elio once already, mainly due to funding issues. Now though, the company says it’s on track to begin production at the beginning of 2015. The Elio will be produced at the old General Motors plant in Shreveport, LA. Elio Motors expects to create around 1,500 jobs in Louisiana, and has the end goal of producing 250,000 Elios each year; although initially the plant will build between 250 and 300 per day.

The Elio offers a color choice for every personality, from vivid hues like green, orange, red, and cobalt blue; to more demure choices like white, black, or silver. They’re all pretty cool.

What Does the Elio Offer?

The production Elio will be equipped with a 0.9-liter three-cylinder engine producing 55 horsepower, mated to either a 5-speed manual or automatic transmission. Inside, the driver will enjoy up to 42.7 inches of legroom, while the rear passenger seat provides up to 33.1 inches. Not a huge amount of space, but plenty if you’re just using it to get around town. The Elio will even have a fairly sizeable trunk, measuring at least 27x14x10, with enough room for a carry-on bag or golf bag.

You might be questioning the safety of this tiny contraption. Although the Elio will be classified as a motorbike and therefore won’t be required to undergo crash testing, Elio Motors plans to put it through testing anyway. The production model will be equipped with safety features like anti-lock brakes, three airbags, a reinforced roll-cage frame, and 50 percent larger crush zones than its competitors.

If you’re interested in getting your hands on an Elio, you can reserve one for as little as $100. This puts you at the end of the list, but still on the path to ownership. If you put down $1,000 you’ll head to the front of the list, plus you’ll receive a spiffy t-shirt and bumper sticker. However, bear in mind that this is non-refundable (although it does go towards the final price of the vehicle).

Watch this space for more news on the Elio as we get closer to its release date! For now, watch the video to see it for yourself.