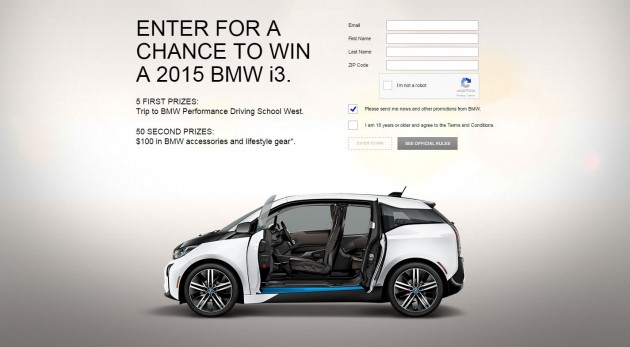 Did you happen to see that clever commercial during the Super Bowl for the all-electric BMW i3? Katie Couric and Bryant Gumbel’s nostalgic, self-deprecating humor has garnered the ad many positive reactions since it aired.

Now, Couric and Gumbel are back–this time to get you in the driver’s seat of your own 2015 BMW i3, just like the one shown in the Super Bowl ad. Check out their “secret message” video explaining how to enter:

According to the video, emailing the old email address in the Super Bowl ad (info@amfeedback) or submitting your information here will enter you in the sweepstakes.

The grand prize in BMW’s i Secret Sweepstakes is a three-year prepaid lease on a brand new 2015 BMW i3, plus a BMW Charging Box and free installation (estimated total value of $35,500).

If you don’t win the top prize, you could be one of the five additional winners receiving a $10,000 trip to Palm Springs for a two-day driving experience at BMW Performance Center, including air fare, lodging, merchandise, and a two-day experience for two at the M Driving School–which might be an even better prize to some!

Fifty other lucky participants will receive $100 BMW Aftersales promotional code for merchandise at shopbmwusa.com, so there are plenty of reasons to enter.

The contest began on January 26th, and you have until February 9th at 11:59pm ET to enter. You have to be a United States resident, have a valid driver’s license, and be over 18 years old. You only have one chance to enter per person/email, so get your whole family to participate, too.

For full details and contest entry, visit the “secret” site for BMW’s i Secret Sweepstakes here.