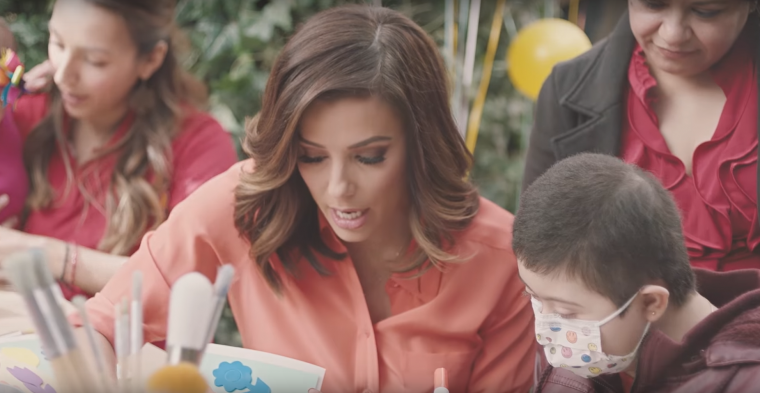 A lot of celebrities participated in Chevrolet’s #DayItForward campaign, but I’m going to go out on a limb and say that Eva Longoria was probably the most truly altruistic of all of them.

A lot of the other celebrities did stuff that was nice, sure, but also a little self-serving. Like Andy Cohen, Ashley Benson, and Lucy Hale’s decision to do stuff with animal charities, presumably because they like animals. Similarly, Mario Lopez and Sofia Vergara were nice to their personal assistants, presumably because that will ensure a positive employer-employee relationship between them and their subordinates. And Jared Padalecki literally just chilled with one of his bros at a guitar shop and called it a day.

But Longoria donated her time to Padres Contra El Cancer (Spanish for “Parents Against Cancer”), a charity that improves the lives of children with cancer and their families. Plus, Longoria has been involved with the organization for ten years, so you know it’s a true passion project for her.

Giving Back: Chevrolet supports the troops at annual Army-Navy game

“They provide services to families that they need right now, whether it’s translators in hospitals, health education about what cancer is [and] what chemo is, grocery vouchers to make sure that these people are eating and not having to make the choice of putting food on the table or buying medicine,” Longoria says about the charity, which specializes in Latino families.

The woman behind all of it is the charity’s CEO Elvia Barboa. To show Barboa how much families appreciate her hard work, Longoria threw a surprise party for her, complete with many of the children and families that she has helped.

Additionally, Chevrolet has pledged to support the Padres’ annual picnic.

Good work, Eva Longoria. This is the true meaning of #DayItForward.

Money Savers: Check out these tips before buying auto insurance