EVs Still Greener Than Gas, Even At Power Plant

As I have written more and more about electric vehicles, one of the arguments against them that gets more irksome every time I hear it. It is what I consider the “displacement” theory. This theory is the idea that electric vehicles aren’t greener, because they just move emissions from a car tailpipe to an electric plant smokestack. It is also, increasingly, ridiculously wrong, according to studies from the Union of Concerned Scientists.

Not Good: The University of Texas is using cars to cook food in tests 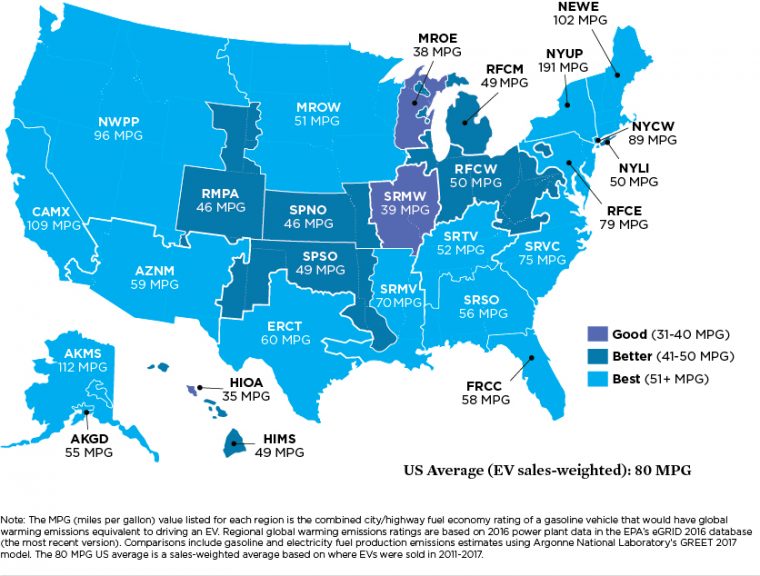 The yearly studies directly address that concern about displaced emissions. Using data from the EPA, it produces a map of the US that shows, based on where you are, what kind of emissions you would generate using an electric vehicle, in terms of what your “mpg” equivalent would be. The greener the grid, the higher the mpg equivalent is.

So, by driving a Chevy Volt in electric-only mode every day to and from The News Wheel’s headquarters in Dayton, Ohio, I am producing the same amount of emissions as if I were driving a gas vehicle that gets 50 mpg. If I were to do the same in upstate New York, it would be even cleaner. I would be putting out the same emissions as someone cruising around in some space-age 191-mpg vehicle. Really, the worst place to drive an electric car is in parts of Hawaii, and you would still be matching emissions from hybrid vehicles.

Keep a Weather Eye: Fall is the season for wildlife on the road, so keep safe with these tips

The study compares the greenhouse gas emissions from fueling and driving electric and gas cars. This includes extracting and refining the fuel for each. For gas cars, this means emissions from petroleum extraction, refining, and transportation, as well as what comes out of your tailpipe. For electrics, this includes emissions from making the various fuels power plants use like coal, natural gas, and others, as well as the emissions out of the plant itself. This year’s update is based on data from 2016.

At the base, this means that all electric vehicles, both old and new, are getting greener over time. An EV from 2009 is today just as green as the newest-model Bolt EV. This trend is likely to continue as more electricity comes from more renewable or lower-emission fuels.