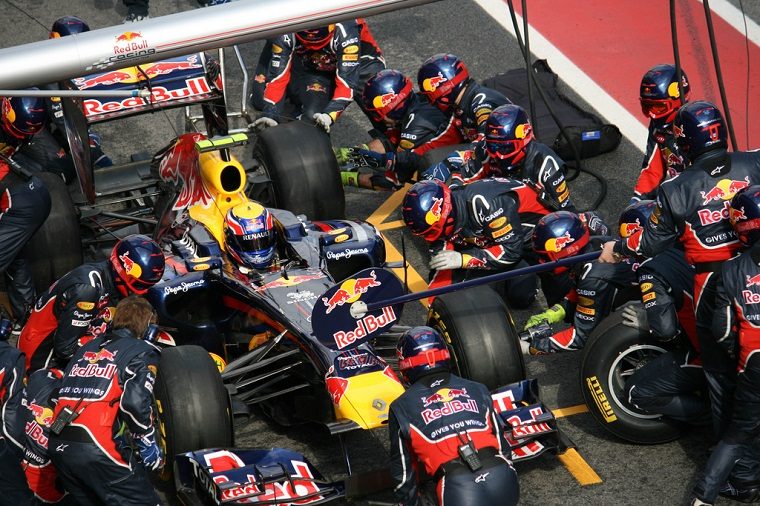 Red Bull practices a pit stop during the 2011 pre-season. At the time the teams used a lollipop man, now replaced by a semi-automatic lights system.
Photo: Gil Abrantes

If you watched the Chinese Grand Prix closely last weekend, you may have noticed that the teams were a little more tentative than usual when it came to the blistering-fast pit stops.

With as many as 20 individuals involved in a Formula One pit stop, the cars routinely stop and go in less than 2.5 seconds, with the very quickest tire changes taking place in less than two seconds.

But so far in 2018 the pit stop phase has been marred by recurring errors. At the Australian Grand Prix, two consecutive and nearly identical errors ruined what had been set to be an excellent race for the Haas team, and in Bahrain a Ferrari crewman’s leg was broken after the driver was mistakenly given the go-ahead even though one of the tires had yet to be changed.

These are deemed “unsafe releases” and the teams involved are always fined by the FIA—but this won’t stop the team from pursuing quicker pit stops, where a tenth of a second can make the difference between a win in a loss, and thus from towing the line between performance and safety.

Formula 1 teams currently use a semi-automated system that is supposed to stop drivers getting the green light to leave the pits before the stop is complete. The system relies on advanced wheelgun sensors that measure the tightness of the wheel nut; when all four wheels are secured, the green light comes on.

But the system is evidently prone to errors: during the Bahrain incident, the old wheel had never even come off, yet the driver was given the all-clear (note that either the rear jack operator or pit stop controller could have overridden the system, but did not notice the tire had not been changed).

F1 race director Charlie Whiting has revealed he will present the teams with a possible solution to help prevent further incidents that would involve two wheelgun sensors—one ensuring the right torque was applied to tighten the nut, and the other checking the position of the nut in case it was accidentally cross-threaded, which was the issue Haas experienced in Australia and McLaren during various sessions throughout the season.

“So, you’re using two sensors to tell the operator it’s actually done up, he presses a button, both jacks drop and the car goes,” Whiting said. “We need to make sure that among other things there is no possibility for the guy to give the OK until those two conditions have been met.”

When suggested by Renault chief technical officer Bob Bell that the FIA could standardize the automated system as part of the new 2021 regulations package, Whiting responded by saying he believed standardization was not necessary as long as the individual team systems made it impossible for a gun operator to declare a wheel was secured without being completely sure.