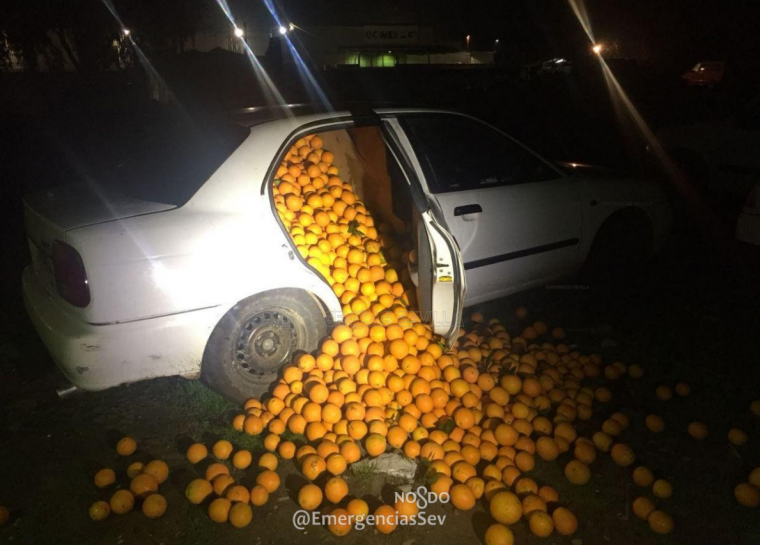 In a small town near Seville, Spain, two police officers were on their regular shift, what seemed to be a fairly uneventful evening. They did, though, find a few oranges on the ground during their shift, saving themselves a few pennies on a midnight snack.

As they got further into the evening, the police officers spotted two vehicles following suspiciously close to one another, both driving erratically. Of course, their likely first assumption was that the drivers were intoxicated or distracted by technology, such as texting and driving. The officers flipped on their lights and peeled out in an effort to pull over the vehicles, but they sped off. Shortly thereafter, the two vehicles pulled onto a dirt road and stopped for police.

A Closer Look: Check out the 2018 GMC Terrain

As police approached the cars, they realized that both vehicles were full of oranges – yes, oranges – stacked all the way to the roof. Thousands of them. The officers spoke with a couple and their two adult children, sitting inside the vehicles. The family insisted they had found the oranges during their journey. They said they had been driving and, each time they saw an orange, they picked it up. Innocent story, right?

Well, as it turns out, it’s not so innocent. A shipment of oranges had been reported stolen from a ship docked in Carmona; unfortunately, the family wasn’t able to enjoy the fruits of their labor for very long. The family was pulled over just a few hours after the theft was reported.

Shortly thereafter, a third vehicle was found – that’s right, you guessed it – completely packed with oranges. A truck this time, driven by a third adult son, the third vehicle contained an additional supply of oranges. In total, police found more than four tons, or 8,000 pounds, of oranges. Assuming one orange weighs about three tenths of a pound, this family had approximately 27,000 stolen oranges in their possession.

How serious is this crime, you ask? The price of oranges fluctuates, but Fortune recently reported their value at $1.47 per pound. With four tons, or 8,000 pounds, stolen, this family could have stolen anywhere up to $12,000 worth of oranges.

All five family members were arrested and charged with theft.

Know Your Options: Find out whether buying or leasing your next vehicle is right for you