Can the blockbuster film franchise be adapted into a high-octane board game? 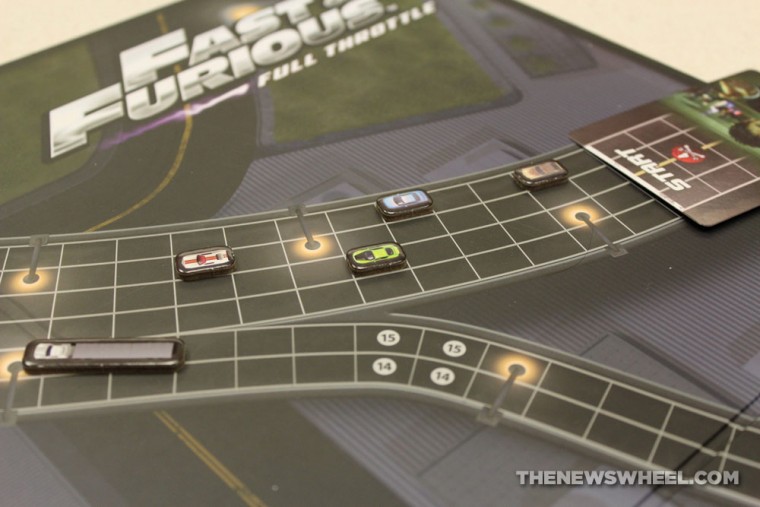 Back in the day, dice-rolling, token-moving board games were everywhere, and that seemed like the only way to adapt movies into competitive family fare. Superman, The Goonies, Candyman–it didn’t matter who the film’s audience was: its game had to be formulaic enough to encourage the most easily-confused people to participate.

Then we entered this renaissance of tabletop gaming; product quality and complexity has risen–along with people’s expectations. So today’s designers are faced with a conundrum: how to adapt a wildly popular film franchise into a board game that’s both faithful and entertaining in its own right.

Fast & Furious: Full Throttle combines card-based hand management elements with strategic movements and an infinitely-customizable track. It was funded via Kickstarter in May 2015–not long after the record-breaking Furious 7 was released in theaters–and is in the process of distribution. Here’s an inside look… 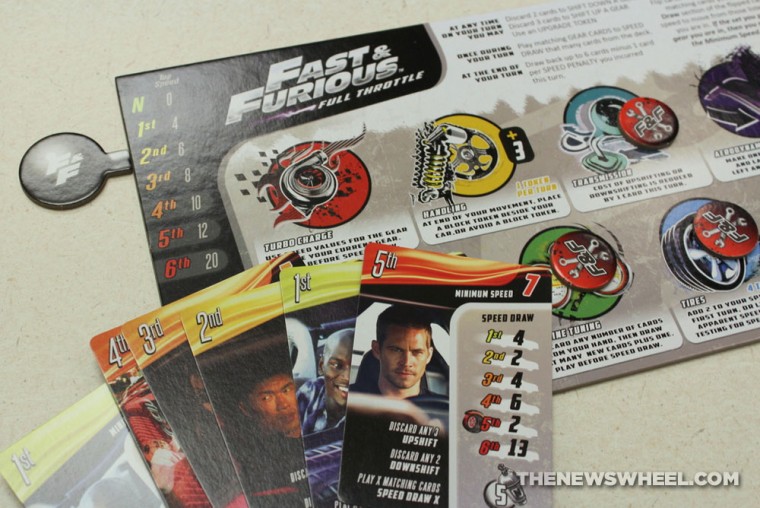 To win Fast & Furious: Full Throttle, your car needs to cross the finish line faster and sooner than your opponents’.

Begin by choosing the course you want to run. Any route can be made on the double-sided board using “start” and “finish” cards. Tokens of bystander vehicles are placed to outline the route or function as obstacles throughout the course.

Players can choose between 12 characters from the movies and customize their cars by selecting different advantages to utilize during the race (such as Nitrous and Transmission). Once the cars have been souped up and playing tokens are placed at the starting line, the race begins.

Starting in neutral, players shift their car’s gears by discarding cards and then move their car through the track via “speed draws.” A speed draw involves playing a series of matching gear cards from one’s hand and flipping over a corresponding number of gear cards from the draw pile, which will determine how many spaces to move. Depending on the player’s choices, his car may suffer damage while losing control of the vehicle. Players also attempt to avoid speed penalties by slowing down around curves on the track, or else their hand size will be decreased on subsequent turns.

Fast & Furious: Full Throttle plays best with four people so participants are forced to navigate around their competitors’ cars on the course. 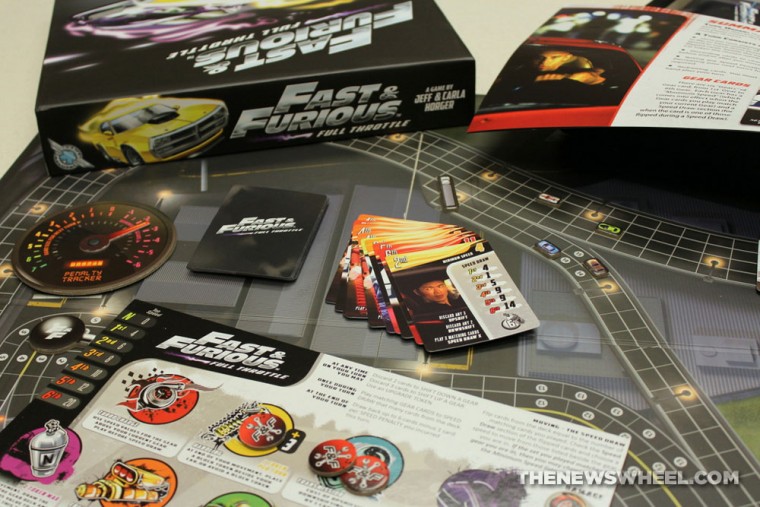 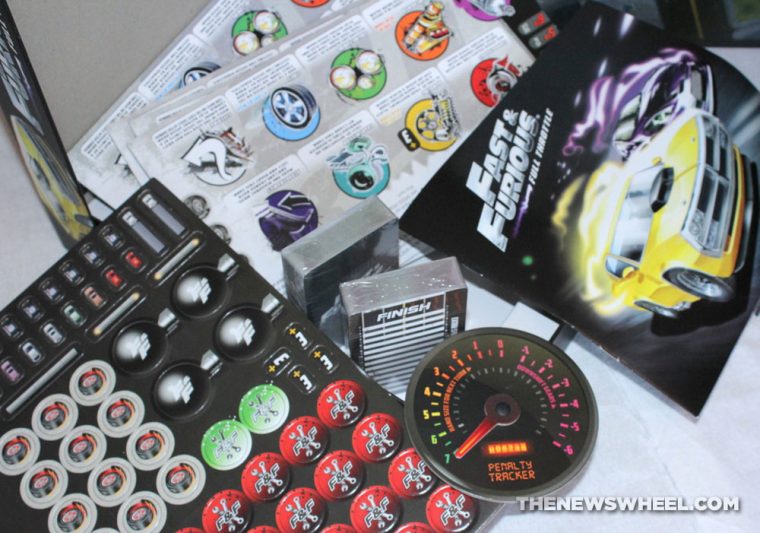 Needless to say after the lengthy components list, a lot of things are packed into a small but heavy box. In spite of that, everything fits compactly and doesn’t shuffle around inside–as long as you put the loose pieces in a plastic baggie and the cards inside rubber bands.

The quality of the components are all excellent, with everything printed on thick cardboard or firm, glossy cardstock. Nothing in the box–or the box itself–feels cheap. The 33-inch by 22-inch double-sided board is a big innovation for replay value. And, I like that the gear cards consolidate so many elements: the speed values, the damage, the nitrous, and a rehash of the turn order.

The cars pawns themselves are very small, making it hard to decipher street racing cars from bystander cars. It would be nice if the playing pieces were 3D plastic cars, making them easier to move, but I understand that would mean losing the stylish detailing on the printed 2D cars. It would also be helpful if the Start and Finish cards weren’t glossy, because they easily slide from their laid position on the board.

It might seem like you’d need more than one penalty dial but when we played it, only one person needed it at a time.

The pictures and artwork are suitable. Clearly this game is intended for long-time fans of the franchise, as images are taken from earlier movies and reference lesser-known characters like ones from Tokyo Drift. 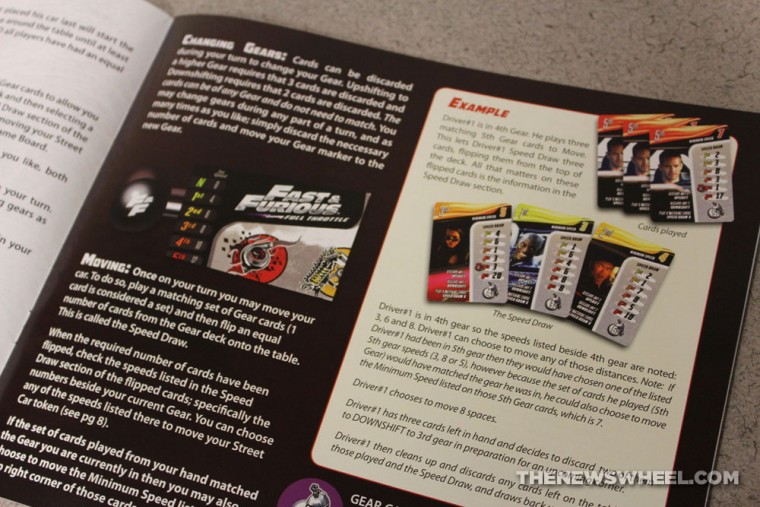 Learning the game play of Fast & Furious: Full Throttle is arguably the most challenging aspect of it, not because its basic mechanics don’t make sense but because the instructions take multiple readings to comprehend. Even with the assistance of diagrams and examples, the wording frequently sounds over-complicated. Even determining turn order and placing pawns at the starting line won’t make sense on the first read.

Its other issue is the heavy use of terms specific to the game or auto industry, such as “Speed Draw” and “Control.” Remembering all of these terms is overwhelming. Looking up these terms in the rules book stalls the game (when researching character abilities for instance), so it would be fantastic if the game had a glossary of all the terms.

Luckily, once you master the directions and learn how the game works, playing and teaching it to fellow players is a breeze–especially when done in steps and you talk through it as you play. More elements of the game can be added as players master the basic mechanics. 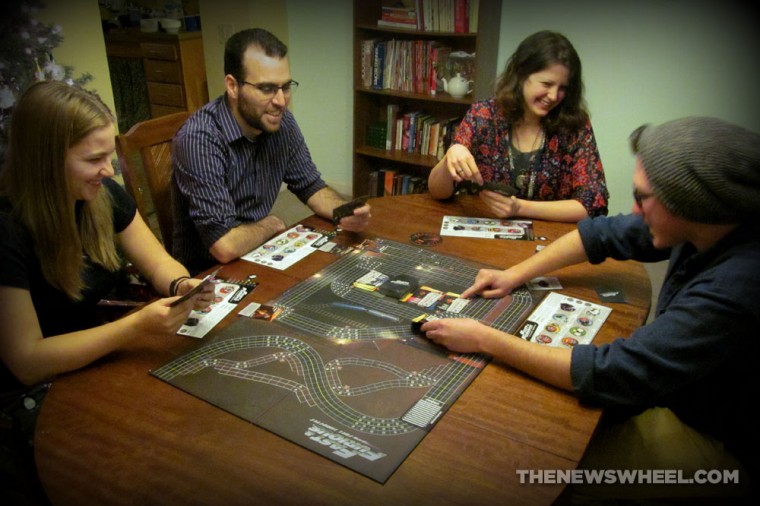 Fast & Furious: Full Throttle tackles a tough task: taking a niche interest that’s the focus of a long-running film series and adapting it into a tabletop game.To be successful, it has to satisfy devout franchise fans but also engage the gamer base who normally purchase items like this.

The wise approach Fast & Furious: Full Throttle takes is not to appeal to both crowds at once, but to make it scalable. By incorporating elements that can be added to or removed from the gameplay–such as character abilities, damage, upgrades, and penalties–the experience and difficulty can be tailored to the player. Most games of this caliber have a steep learning curve, and while the written directions do take some time to understand, incorporating new aspects into the gameplay itself is fluid.

When my friends and I played, two racers tied and the other two fell far behind the leaders pretty quickly. It’s near-impossible to come back from lagging behind in Fast & Furious: Full Throttle; that might frustrate some participants or motivate others to seriously concentrate on every move.

I love that Fast & Furious: Full Throttle really captures the essence of driving a car–shifting gears, customizing your vehicle, and slowing down around curves. It really is a step above most racing games that don’t even consider what operating a car is like.

If you’re a serious petrol-head that enjoys gaming or if you’re a die-hard fan of the Fast & Furious franchise, this is surely a game that should cruise into your collection. It won’t win over anyone who’s not a car fanatic or avid gamer, as they will become overwhelmed by or bored with the theme and pacing.

But as an adaptation of the street-racing spirit of the early Fast & Furious entries, this game fires on all cylinders.

Fast & Furious: Full Throttle will be available through the publisher’s website and other online retailers soon.