Federal, California Governments Square Up in Moments Before Fight Over Vehicle Emissions Rules 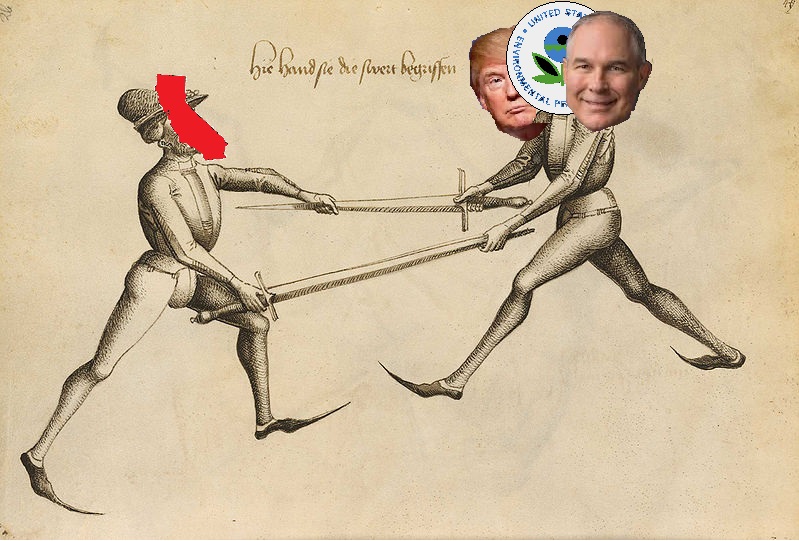 Jabs are being lined up in the looming Environmental Protection Agency/Scott Pruitt/Trump vs. California regulatory cage match as the EPA prepares to announce its decision on whether or not to roll back Obama-era vehicle emissions and fuel efficiency regulations.

On the EPA side, the agency has submitted its draft decision to the White House Office of Management and Budget, and sources Bloomberg cites as “familiar with the matter” have said that the EPA will be playing the part of chainsaw opposite the regulation’s performance as pine forest (although this wasn’t a surprise to anyone). According to the anonymous sources, the EPA hasn’t decided what the new rules should be, only that they should be lower.

EPA head Scott Pruitt has said that although California regulates emissions at a state level, it “shouldn’t or can’t dictate to the rest of the country what these levels are going to be.”

On California’s side, so far the state’s Air Resources Board (CARB) isn’t saying what it is doing, exactly, instead stating that it has to wait and see the official document first.

However, again speaking to anonymous sources, Bloomberg reported that California is preparing to revoke its “deemed to comply” provision of emissions law. This less-known law just says that if a vehicle passes EPA standards, then it passes California standards. Revoking this would officially uncouple California, and the several states with follow its lead in emissions regulations, from the EPA’s rules. These states make up about a third of the nation’s car market.

Meanwhile, sitting uncomfortably in the middle are automakers, which after strenuously lobbying to have these regulations rolled back are now facing the very expensive possibility of a patchwork of different rules from state to state. Instead, now the carmakers are lobbying for federal officials to compromise with CARB and not to lower regulations so much that California backs out of the talks.

Either way, a fight is at hand, mostly likely to start, ironically, on Easter Sunday this weekend.