Jean Louise gets off the train at Maycomb Junction
Illustration: Tom Clohosy Cole for The Guardian

Go Set A Watchman is all the literary world can talk about right now. The predecessor to Harper Lee’s To Kill A Mockingbird was found by her lawyer and is set to be released on July 14th after much debate about the author’s consent to the publication. Scout, a.k.a. Jean Louise Finch, is now grown up and returning home to Maycomb to visit her father, Atticus. What many people don’t remember is that that General Motors and Chevrolet seem to be the car brand of choice for the Finch family, and peeks into the new book suggest that has not changed.

In both the book and the film adaptation of To Kill a Mockingbird, Atticus Finch has always been a dedicated Chevrolet driver. Scout says of her father, “As far back as I could remember, there was always a Chevrolet in excellent condition in the carhouse, and Atticus put many miles on it in business trips.” When playing Atticus Finch on the big screen, Gregory Peck was seen driving a stately Chevrolet to the home of Tom Robinson. 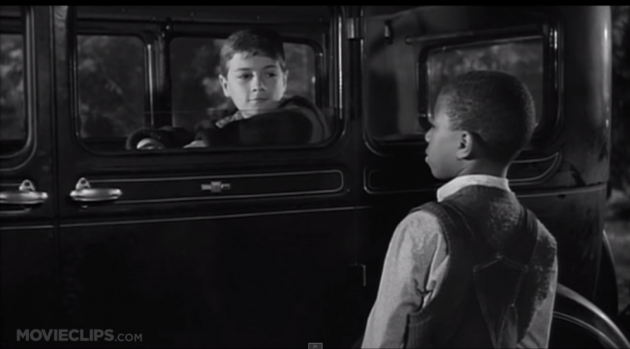 Check out that Chevy Bowtie under Jem’s window

In anticipation of the upcoming release date, the first chapter of Go Set A Watchman has been released online. While Jean Louise travels home to Maycomb on the Crescent Limited train, she is picked up from the station and conveyed into town in a General Motors vehicle by new character Henry Clinton. Jean Louise and Henry have a discussion about the vehicle and its new automatic transmission and power steering. During an argument later in the chapter, the absence of a stick shift flusters Henry:

‘Don’t be such a damn child, Jean Louise!’ Henry sputtered, and forgetting the latest dispensations from General Motors, grabbed for a gearshift and stomped at a clutch. These denied him, he wrenched the ignition key violently, pressed some buttons, and the big car glided slowly and smoothly down the highway.

Harper Lee’s much-anticipated new book, Go Set a Watchman, isn’t out until July 14 — but you can read the first chapter right now.

The Wall Street Journal shared the chapter on its website for the United States, and the Guardian released the first chapter with beautiful illustrations in the United Kingdom. It will be interesting to see what this new book has to offer the world of To Kill a Mockingbird, and of course we at The News Wheel will be keeping our eyes peeled for more classic cars.