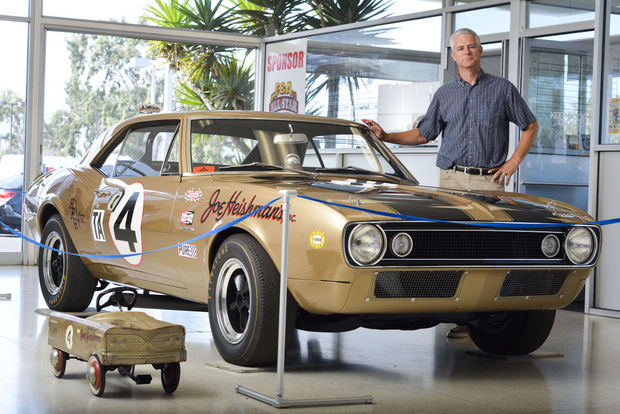 It’s a story that all car collectors dream about. Man finds a beat-up old car, discovers that it is historically relevant, and restores it to its former glory. Well, ladies and gentlemen, Jon Mello of Lompoc, California, is living the dream.

About 16 years ago, Mello’s friend, based in Florida, asked him to go look at a car for sale in the Bay Area that he was interested in for parts. When he arrived, he found a pretty beat up Chevy Camaro Z-28. It had obviously been used for racing, as there were patches over former exhaust holes and holes in the floor to mount a protective roll bar. Mello was intrigued, and made an offer to the owner to buy it for himself.

Looking For A Chevrolet Camaro Of Your Own? Check out the design of the newest Camaro convertible

Once the Chevy Camaro was his, he began to sand it and uncovered one of the vehicle’s original paint jobs. It featured racing stripes and sponsorship writing indicative of racing in the late 1960s. Mello then kicked his research into high gear, finding a photo of a racer from 1967 next to a car painted like his. Johnny Moore of Virginia was the driver, and, after contacting him, Mello was pointed to the car’s original owner, Hugh Heishman. Heishman owned both a dealership and a race team, and provided Mello with the car’s original bill of sale.

Using the VIN number, Mello was able to determine that the Camaro Z-28 was built on December 29, 1966, and, remarkably, that it was the first Camaro Z-28 ever produced. The car was used in six races before its career ended and it retired to street driving, making its way from the east coast to California.

Hauling Classic Cars From Place To Place? Take a look at these safe towing tips

“This car is too special to be sitting in my garage, and it’s too loud to be driving around on the street.”

Once Mello realized the history of the old Camaro in his garage, he teamed up with Hod Rod Ranch to complete the restoration work. If you live in California, head to Lompoc’s Sunset Auto Center in the next couple of weeks to see this first-of-its-kind car.