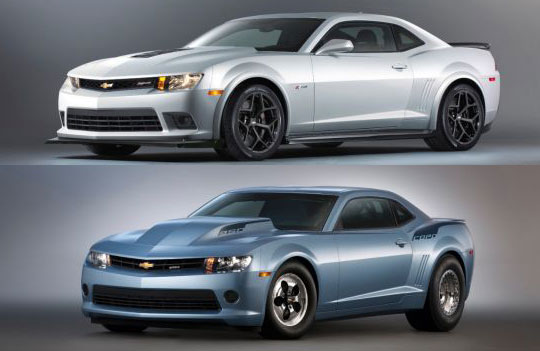 How would you like to get behind the wheel of a couple of historic Camaros?  How does being the owner of the first 2014 Camaro Z/28 or the first 2014 COPO Camaro produced for retail sound to you?  Two lucky individuals decided that it was worth it to them to pony up $650,000 and $700,000 for the first production Z/28 and COPO Camaro, respectively.

The first production Z/28 and COPO Camaro were both on the block at this weekend’s Barrett-Jackson auction in Scottsdale, Arizona.  The COPO Camaro was up to bat on Friday with an LS-based supercharged 350-cubic-inch engine, one-of-a-kind COPO Ice Blue Metallic satin paint job, and a serial number reading 1.  The proceeds of the sale went to benefit the Achilles Freedom Team of Wounded Warriors.

The first production-manufactured 2014 Camaro Z/28 was up for grabs on Saturday night, with funds raised benefitting Cornerstone Schools of Detroit.

“Chevrolet is excited to offer these two milestone cars for the Barrett-Jackson bidders, with all the proceeds going to help a pair of very worthy groups,” said Jim Campbell, General Motors U.S. vice president of Performance Vehicles and Motorsports, in a statement released prior to this weekend’s auction.

The 2014 COPO Camaro that took in $700,000 was one of only sixty-nine that will be produced this year and is not what you’d likely call street-legal.  The buyer of the first 2014 Z/28 was none other than Rick Hendrick, owner of Hendrick Motor Sports.  The $650k he ponied up bought him 505 horsepower, 481 lb-ft of torque, and one awful purty-looking Camaro.

While the first production Z/28 and COPO Camaro are both spoken for, you still have the chance to own the Z/28 when it arrives at dealerships this spring, or the COPO Camaro by signing up at the www.chevroletperformance.com mailing list for your one-in-68 shot.