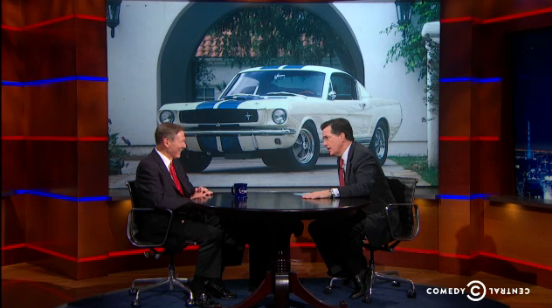 Ford CEO on Colbert Report: Alan Mulally joined Stephen Colbert for a talk about Mustangs and the more practical uses for their back seats / © Comedy Central

Say what you will for speed and power, but there is most certainly an understood (if not unspoken) draw for those who put themselves behind the wheel of a muscle car like the Ford Mustang: sex appeal.  If he had somehow forgotten this fact, Ford President and CEO Alan Mulally was put on notice by America’s favorite faux-right wing pundit Stephen Colbert on last Thursday’s episode of The Colbert Report.

Mulally was in New York after the 2015 Ford Mustang made its official debut on Good Morning America and paid the Report a visit to help promote the big reveal.  Colbert wasn’t terribly interested in talking torque or horsepower, however.  He had something else on his mind, and his line of questioning was certainly a bit more late-night in tone than what Mulally had experienced that same morning.

Within minutes of starting the interview, Colbert threw to a picture of a red 1965 Mustang convertible on the screen behind the table where he and Mulally sat while the sounds of the pony car’s engine revving played over the studio speakers.  However, the very suggestion of the vintage Mustang seemed to be too much for Colbert to handle and he ordered the image taken down after only a handful of seconds. 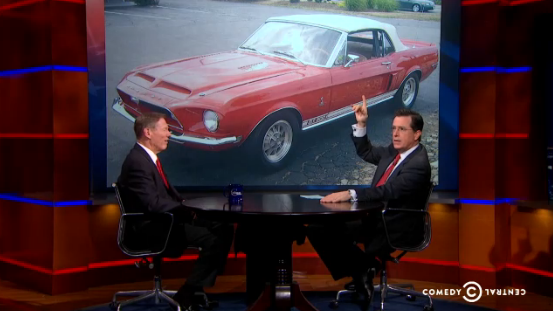 The interview continued on a similarly sexualized path when Colbert asked Mulally why the Mustang had become a half-century icon when so many other vehicles had failed.  The Ford President and CEO discussed how the original Mustang had changed the world by being a high-performance sports car with real-world utility, particularly because it had two seats in the back.

Colbert interjected with a chuckle: “Of course it had two seats in the back!  It was a Mustang!  The reason it became an icon is because it got you laid.”

The suddenly-sheepish CEO laughed good-naturedly while Colbert added, “I hope you haven’t taken that out of the design.”

With a cool smile, Mulally responded with a little deadpan of his own: “It’s still very much appreciated.” 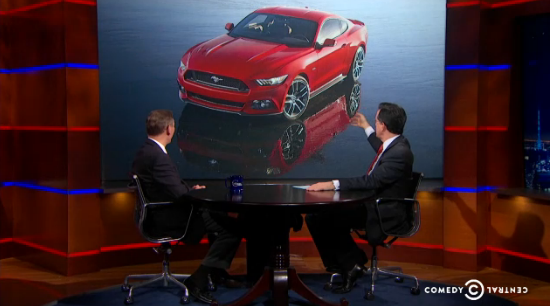 And how!  Colbert then showed the newly-revealed 2015 Mustang, which has more than a little sex appeal of its own, questioning whether or not Mulally was aware that it was still 2013 and if he had arrived on-set in the 2028 Ford Time Machine.  (“Does it have a jetpack?”)

Further discussion moved on to discussing Ford’s role in the bailouts—not taking a bailout but testifying on behalf of their competitors in their quests to receive government funding—complete with Colbert equating GM and Chrysler to Bolsheviks (“Dasvidaniya, comrades!”), and asking how Mulally would go about saving the bankrupt city of Detroit (Colbert recommends yanking the gold fillings out of the pensioners).

It’s a very candid interview that gives some great insight into Mulally the man (even if he never confirms nor denies making use of those Mustang backseats himself).  For more information on the 2015 Mustang as it develops, stay tuned to The News Wheel!