It was announced today that Ford and GE (General Electric) will be teaming up once again in order to install vehicle charging stations at Ford corporate facilities around the country. The stations, known as the   GE WattStation™, will allow Ford employees to charge their EVs/plug-in hybrid vehicles during their workday.

The move not only makes life easier for those Ford employees who already own vehicles such as the Fusion Energi or C-Max Energi and commute longer distances to work, but also incentivizes employees who have not gone green to make the switch in the near future. 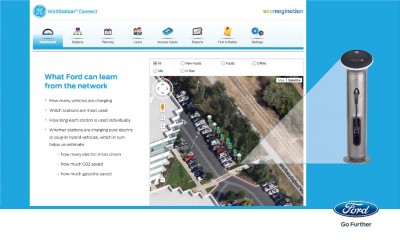 Ford and GE have collaborated on a new electric car charging station for Ford employees.

“Ford’s commitment to sustainability extends beyond our fuel-efficient vehicles to include our daily workplace,” said Mike Tinskey, Ford director of vehicle electrification and infrastructure, in a press release. “We know that a growing electrified vehicle infrastructure is key to making plug-in vehicles a viable option for more consumers. Ford is committed to doing its part to help develop that infrastructure.”

Ford and GE plan to install GE WattStations at more than 60 of the automaker’s offices, product development campuses, and manufacturing facilities around the country. The first installation is getting underway now at the company’s headquarters in Flint, Michigan. 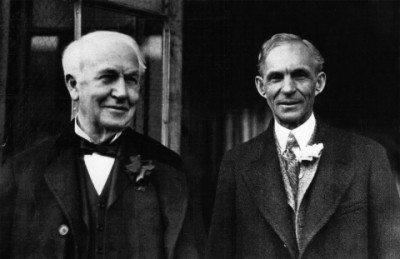 Henry Ford and Thomas Edison first collaborated over a century ago.

Ford and GE are no strangers, as founders Thomas Edison and Henry Ford worked with one another as far back as the late 19th century. In the earliest days of the Ford Motor Company, Ford and Edison worked together to create electric vehicles that utilized Edison batteries, though they never went to market. Oh, to think what might have been.

If your workplace had charging stations installed and offer free services for at least part of your work day, would that be enough to convince you to purchase a plug-in hybrid?