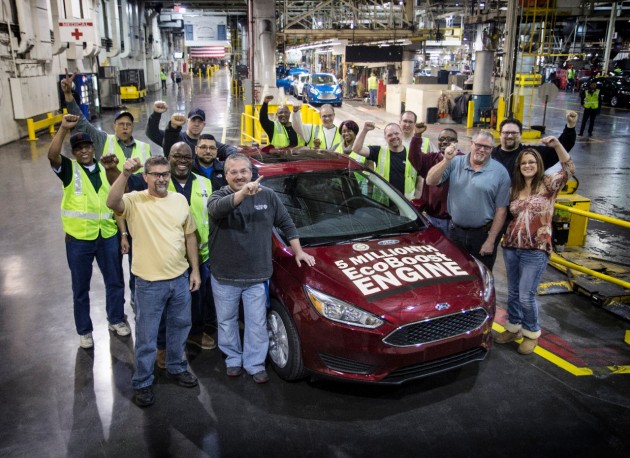 Ford has announced that the 5-millionth vehicle powered by one of its EcoBoost engines has been produced at its Michigan Assembly Plant in Wayne, Michigan. The vehicle in question—a 2015 Focus in Ruby Red—is powered by Ford’s multi-award-winning 1.0-liter turbocharged EcoBoost engine.

Ford began production of its EcoBoost engine line in 2009 with the Ford Taurus SHO, which was powered by the 3.5-liter EcoBoost V6. Ford produced 14,439 EcoBoost engines that year, and then the number increased four-fold the following year with 62,704 EcoBoost-equipped vehicles manufactured.

In October 2013, Ford crossed the two-million EcoBoost engine milestone. Less than a year-and-a-half later, the 5-million-engine milestone has been achieved.

The 1.0-liter EcoBoost engine found in the 2015 Ford Focus is a three-time winner of the International Engine of the Year award, and it has been among Ward’s 10 Best Engines for the past two years.

Ford has positioned it to where every model in its lineup can be equipped with an EcoBoost engine, and it continues to grow opportunities for production in the United States. Ford recently announced that the Cleveland Engine Plant will now support production of the 2.0-liter and 2.3-liter EcoBoost engines; the former will appear in the upcoming 2015 Ford Edge, and the latter is available for the 2015 Ford Mustang, 2016 Ford Explorer, and 2015 Lincoln MKC.