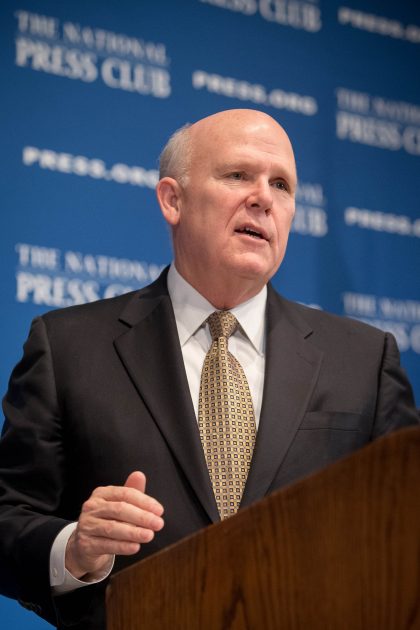 There are many things that could be said about Republican presidential nominee Donald Trump. Just reading that name, you no doubt sense words bubbling to the surface that describe your feelings about the man. You might think, for example, that he is a born leader who is rational, intelligent, and capable of expressing himself in an eloquent manner that in no way resembles the speech patterns of a poorly-written video game NPC. And, hey, it’s super great that you feel that way, particularly if you should wake up on November 9th with the distinct feeling that you forgot to do something very important the previous day.

Dan Akerson, the former CEO of General Motors and a self-professed life-long Republican voter, took the opportunity to pen an op-ed for The Washington Post last month wherein he offered up a few words of his own to describe his feelings pertaining to the man who could conceivably become the United States’ next Commander-in-Chief:

And I have always voted for Republicans for president. Not this year.

The compelling rationale behind this decision: leadership. A good leader must demonstrate such qualities as competence, integrity, empathy, character and temperament. Hillary Clinton has these essential qualities. Donald Trump does not.

Perhaps it would be fair to say that Akerson is not a fan of everyone’s favorite dumpster fire.

Akerson writes that Trump “simply lacks the competence to serve as president of the United States,” calling his understanding of concepts essential to the effectiveness of the leader of the free world “rudimentary at best” and his views “misguided.” Despite these statements being made in an opinion piece, it would be completely fair to instead call them observations of demonstrated facts.

Akerson served as General Motors’ CEO from September 2010 to January 2014, guiding the company to a record $7.6 billion in profits during his first year at the helm. In comparing his acumen to that of Trump, he wrote the following:

When I worked at General Motors, our global operations comprised more than 100 plants and roughly a quarter-million employees. Supply-chain management and the orchestration of commodities, parts, and components around the globe required a multinational, interdisciplinary effort. In every chief executive job I have had, my team and I spent countless hours analyzing global trends, listening to experts, learning from others and making informed, reasoned decisions. Trump does none of that. While running a successful hotel business is honorable and hard work, there is no comparison to running a sophisticated global operation such as the U.S. government. Trump is simply not up to a job of this complexity.

Akerson pointed to Trump’s continued appeals to bigots and xenophobes as primary causes leading to his endorsement of Hillary Clinton
Photo: YouTube

Among the other aspects of Trump’s arduous campaign called into focus by Akerson are his appeals to the prejudiced, xenophobic, and intolerant; his diminutive and dismissive attitude toward people of the Muslim faith, women, minorities, the differently-abled, and even The Pope; his contemptuous statements about John McCain; his inexplicable feud with the parents of Army Capt. Humayun Khan, who died serving in Iraq; his petulant attitude toward both Republican and Democratic candidates; and his continuing mendaciousness.

Ironically, the man whose decision to step aside enabled the appointment of the first female CEO of a major automaker took the opportunity to endorse Trump’s opponent, who is poised to become the first female president of the United States.

By contrast, Clinton has been tested. She has demonstrated balance, calm and an even temperament. She has an unparalleled knowledge of foreign and economic policy; she has run complex organizations such as the State Department. Over the years, she has demonstrated that she can take criticism and work with even her most strident political opponents. Like other leaders, including myself, she has made mistakes. I believe she has learned from those mistakes. In my opinion, she is ready to be commander in chief on Day One.

In June, Akerson was one of 50 influential business leaders to endorse Clinton. He was joined by the likes of Berkshire Hathaway CEO Warren Buffett, Alphabet Executive Chairman Eric Schmidt, Facebook COO Sheryl Sandberg, and Netflix CEO Reed Hastings. Prior to that endorsement, Trump briefly targeted GM for producing vehicles in Mexico before removing the reference to the company from the offending statement altogether.

More from GM: New Chevy Cruze is most fuel-efficient in its class