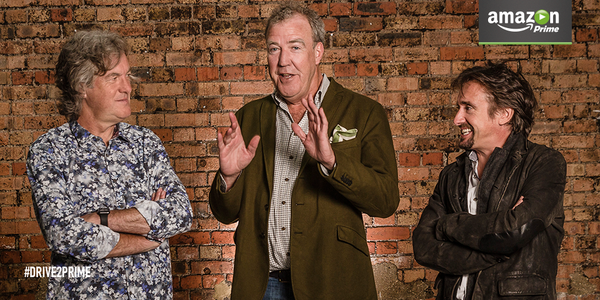 Clarkson, May, and Hammond have signed on for a new Amazon Video show
Photo: Twitter

When Jeremy Clarkson, James May, and Richard Hammond all left Top Gear after Clarkson’s kerfuffle with one of the show’s producers, gearheads everywhere expected to see them pop up on Netflix with their own show. Well, it looks like we were wrong about that.

The trio will instead be working for Amazon Video. And no, not as drone pilots, much to Clarkson’s disappointment.

.@AmazonVideoUK now saying I can’t be their chief drone pilot. Apparently they want us to make a car show.

Information about the show is quite limited right now. All we know is that it was signed. Clarkson was the first one to make the announcement via Twitter, with May and the Hamster quickly following suite.

I’m very excited to announce that Hammond, May and I have signed a deal with .@AmazonVideo — Jeremy Clarkson (@JeremyClarkson) July 30, 2015

Good news! I’ve got a job with @AmazonVideoUK. Bad news! So have the other two. #AmazonPrime #ItSaysHere

It looks like Hammond even celebrated with a haircut.

Right now, rumors are still flying about concerning Top Gear’s new hosts with the most recent centering around Formula One driver Jenson Button.

Knowing that the three former Top Gear hosts will be at it again is a huge weight off our shoulders. We can’t wait to hear more about this future show. Until then, it looks like the boys better brush up on their driving skills.