Formula De Review: Thoughts on the Celebrated Racing Board Game 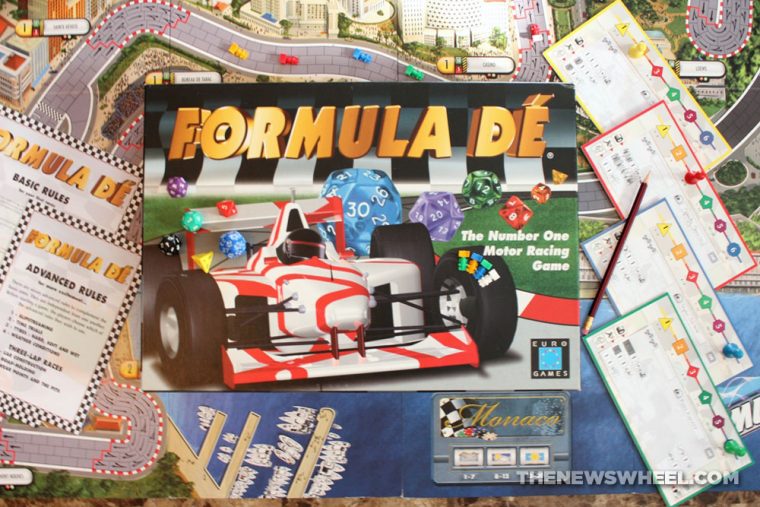 Many automotive racing board games have topped dining room tables over the years, but few have reached the lauded reputation and enthusiastic popularity of Formula De. Most gamers know this title for the 2008 edition by Asmondee, Formula D, which gave the game a sleek, high-quality reinterpretation for the 21st century.

Formula D originated more than 15 years earlier in France as Formula De. It established many standards of motorsport board games to come and has inspired many imitators. Does the original Formula De hold up nearly 30 years after its original release?

Review of Formula De:
“The Number One Motor Racing Game”

So Many Choices: How to know if you’ve bought the right classic car 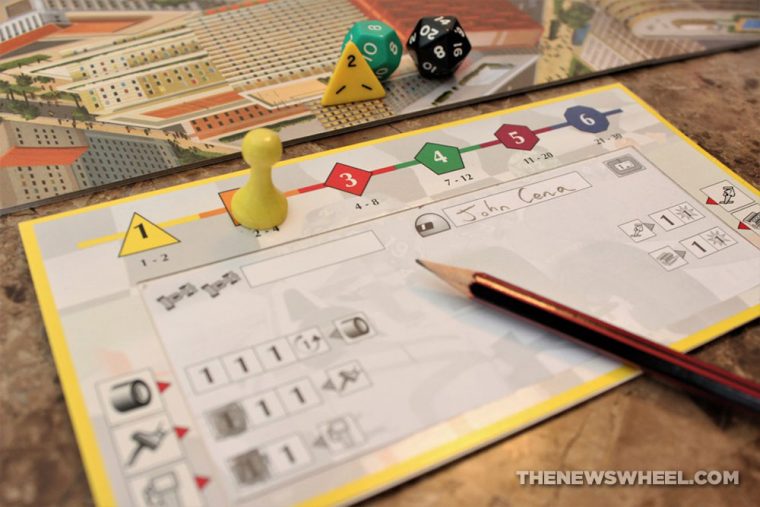 Choose your colored plastic car to enter in the Formula De race and receive a corresponding dashboard to track your car’s speed and condition. Once everyone agrees on which track to race on (as the board is double-sided), roll the die to determine the starting order.

The race begins, and players move their cars down the track by rolling a movement die. There are six different die of particular colors, each corresponding to the six gears of the race car. Each player begins in the lowest gear — which offers the lowest (i.e. slowest) movement potential — and can choose to move up a gear every turn. Each subsequent gear provides a bigger die with more, higher movement possibilities.

However, racers can’t just put the pedal to the metal the entire race. When navigating curves and turns, players must reduce their speed to make a certain number of stops before proceeding. Otherwise, the car will suffer damage in various ways — some of which can eliminate it from the game! Players can use the brakes sparingly, and they must also navigate around their competitors to avoid colliding.

Eventually, one car will cross the finish line first, making them the victor. 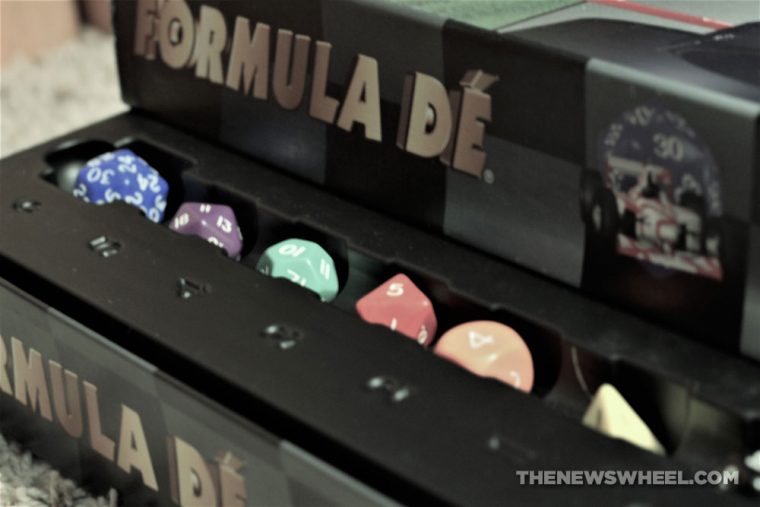 Formula De proudly advertises its Formula 1 inspiration and dice across the front of the box, resulting in a bold, colorful cover. The box itself is long and bulky compared to modern board games, but it’s sturdy and includes a useful plastic organizing insert. All the components are high-quality, attractive, and easy to identify. The use of color to differentiate the dice and their corresponding gears is clever, and overall the physical execution of the game is successful. The pencil-and-paper method of tracking damage is definitely outdated and, though sufficient upon initial release, is the only material aspect that doesn’t age well.

Must-Visit Gearhead Destinations: Have you been to the Corvette Museum? 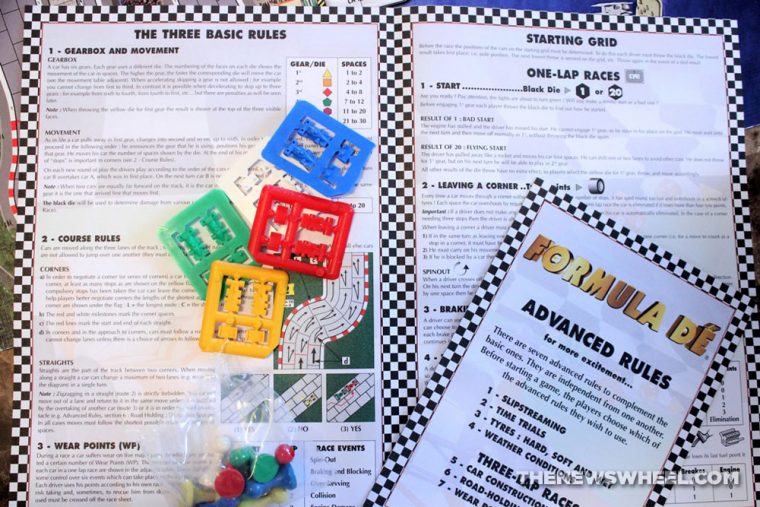 Formula De separates is basic rules from its full, advanced rule set by dividing them into two separate booklets. That way, once you master the basics of movement and damage, you can add slipstreaming, weather conditions, tire types, and rules for three-lap races. However, if players prefer to keep it simple, the basic rules work just fine on their own. Both rule books are well-organized, easy to understand, and explain every rule and consequence in clear terms. A quick read-through before your first play should be enough to prepare you to play with a group of rookies. 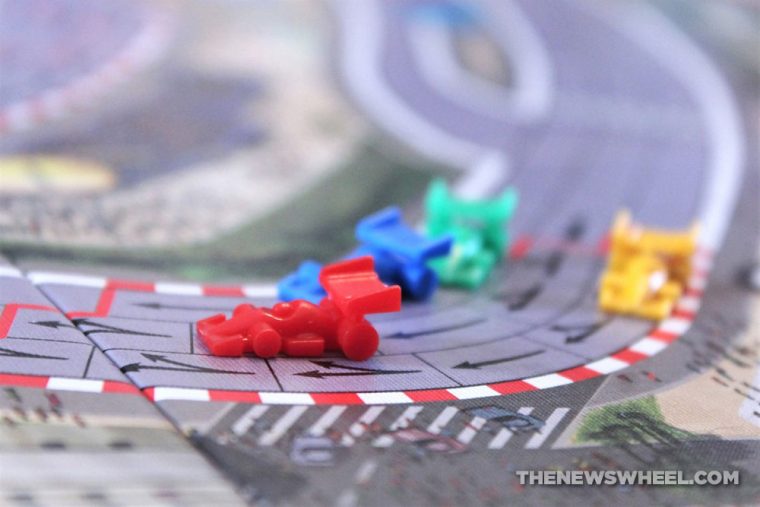 With this being my first time playing Formula De (and never having played Formula D), I had high expectations. Numerous other motorsport board games have striven to reach the prestige of this legendary title. Did it live up to the hype? Surprisingly, it actually did.

Although many of the elements of game have been done before and seem elementary, their cohesion in Formula De integrated effectively. It never felt overly complicated or too contingent on chance, even with the inclusion of dice-rolling for movement.

The simple rules for moving cars and the straightforward ways to determine and track vehicle condition kept the gameplay from getting bogged down in technicalities. For instance, moving a car through curves on the racetrack is one of the most complicated, headache-inducing parts of most racing board games. But Formula De simplifies it brilliantly: by printing movement arrows directly on the board. Also, increasing and decreasing gears is quick and simple, allowing the player to focus more on strategy than on comprehending the rules.

Where my experience playing Formula De declined was when we played with a lot of people at once. One of the selling points of this game is its ability to accommodate up to 10 players. Yet, the more players there are, the more downtime there is between turns and the longer each turn takes (since there are more cars on the track to avoid). As the number of players increases, so do the amount of calculations needed to make a move. Playing with the advanced rules further exacerbates the downtime, so Formula De‘s major selling point doesn’t really sell: It can take nearly two hours to complete a single lap with 10 players.

Playing with 4-5 players keeps the pace clipping along quickly and the turns brief. I had a lot of fun with Formula De, enough that I’d actually bring it to game nights with people who aren’t interested in motorsports. The streamlined movement and unambiguous rules make it a welcome addition to any game collection.

Formula De is out of print but , but it’s available as Formula D by Asmondee, which is available on Amazon.